As part of the Annual World Oceans Day celebrations, the Our Beautiful Ocean exhibit highlights the beauty of the ocean, some of the challenges it faces, in particular from plastic waste, and how humans are helping to overcome this.

We celebrate World Oceans Day on June 8 to remind everyone of the major role the oceans have in everyday life. They are the lungs of our planet, providing most of the oxygen we breathe. They are a major source of food and medicines and a critical part of the biosphere. In the end June 8 is a day to celebrate together the beauty, the wealth and the promise of the ocean, and to inform the public of the impact of human actions on the ocean in order to mobilize and unite the world’s population to protect and sustainably manage the world's oceans.

• These photos are drawn from the Annual World Oceans Day Photo Competition 2018 winners. Some of the information has been sourced from the 2016 First World Ocean Assessment. This exhibit is organized by the Division for Ocean Affairs and the Law of the Sea, Office of Legal Affairs of the United Nations with the support of the Swiss watch manufacturer Blancpain. The 6 photos in the exhibit will be mounted and displayed 3ft x 6ft each. 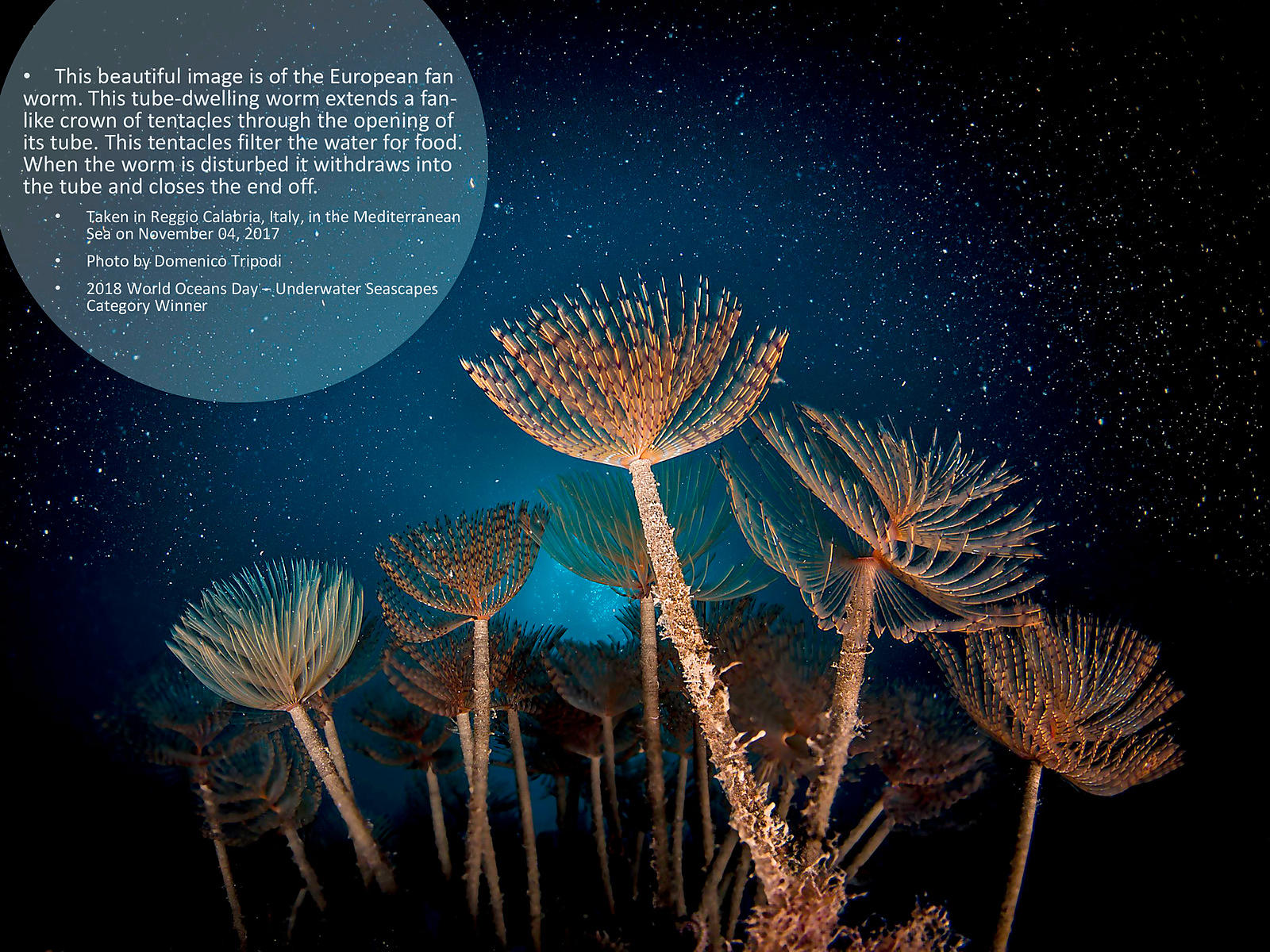 Beauty and the Beast

• Some of the most beautiful species in our oceans, such as the colorful lionfish, or the European fan worms in the image on the left, have also become invasive species after being introduced into new ecosystems, usually by humans, where they compete with native species.

• The Convention on Biological Diversity recently issued guidelines to stop the escape of alien species, including from aquariums, to prevent damage to local ecosystems.

• You can help, by making sure any fish you use in an aquarium has been shown to be non-invasive. 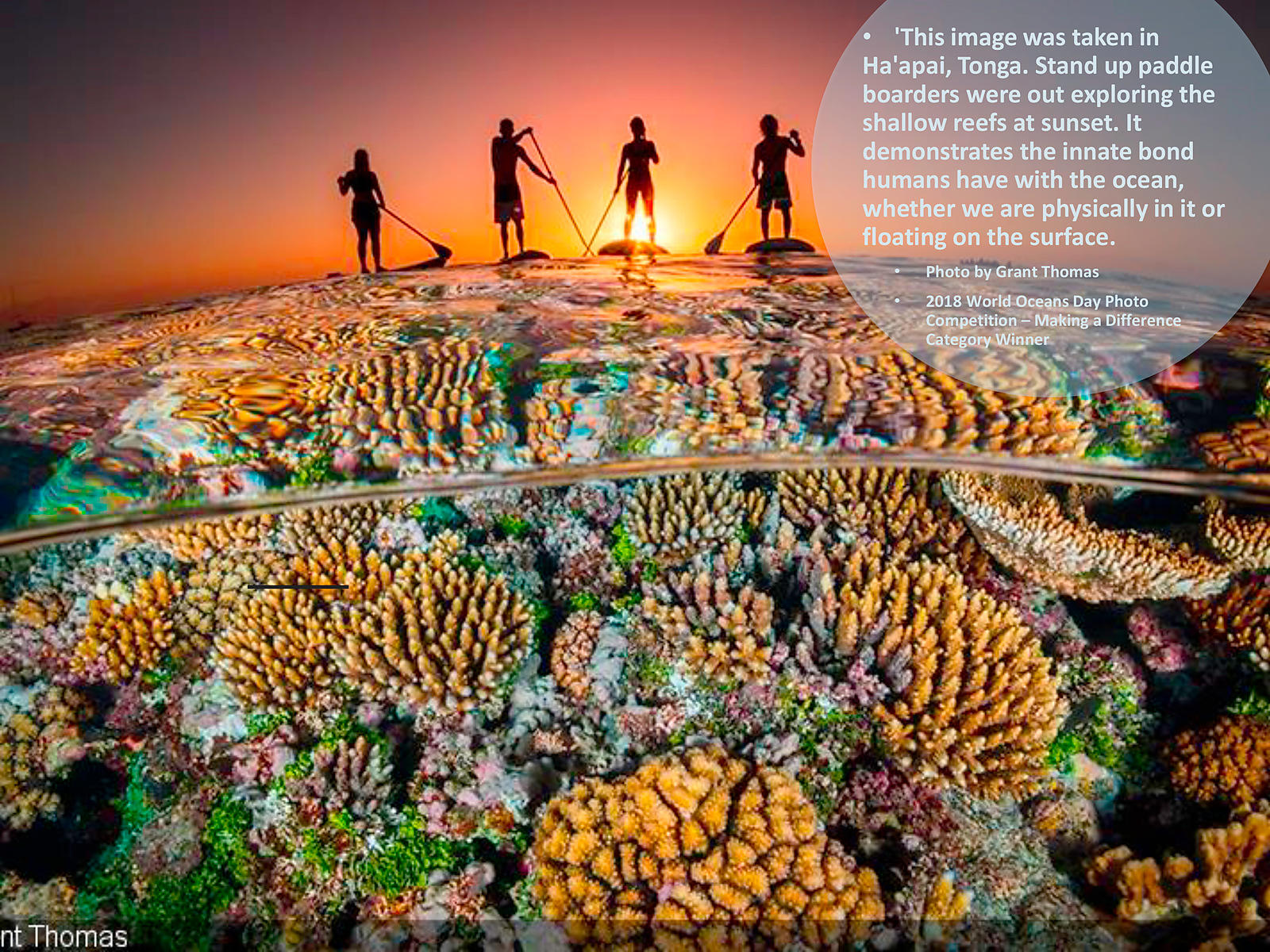 • Coral reefs make major contributions to life in many countries, especially small island developing States (SIDS), like the Pacific island of Tonga where the image on right was taken. In these countries coral reefs are important in the provision of food, materials and income from tourism and fisheries. Coastal and island societies are often largely or nearly completely dependent on adjacent coral reefs, with cultures developed around those reefs; and reefs contain the largest reservoirs of biodiversity in the world.

• Many Pacific communities have developed strong cultural affinities towards the reefs and many of these remain active and recognized by local and national governments.

• The image on the right shows the island of Mayotte, which has the largest barrier-reef-lagoon complex in the southwestern Indian Ocean.* The complex is home to an incredible diversity of marine species. 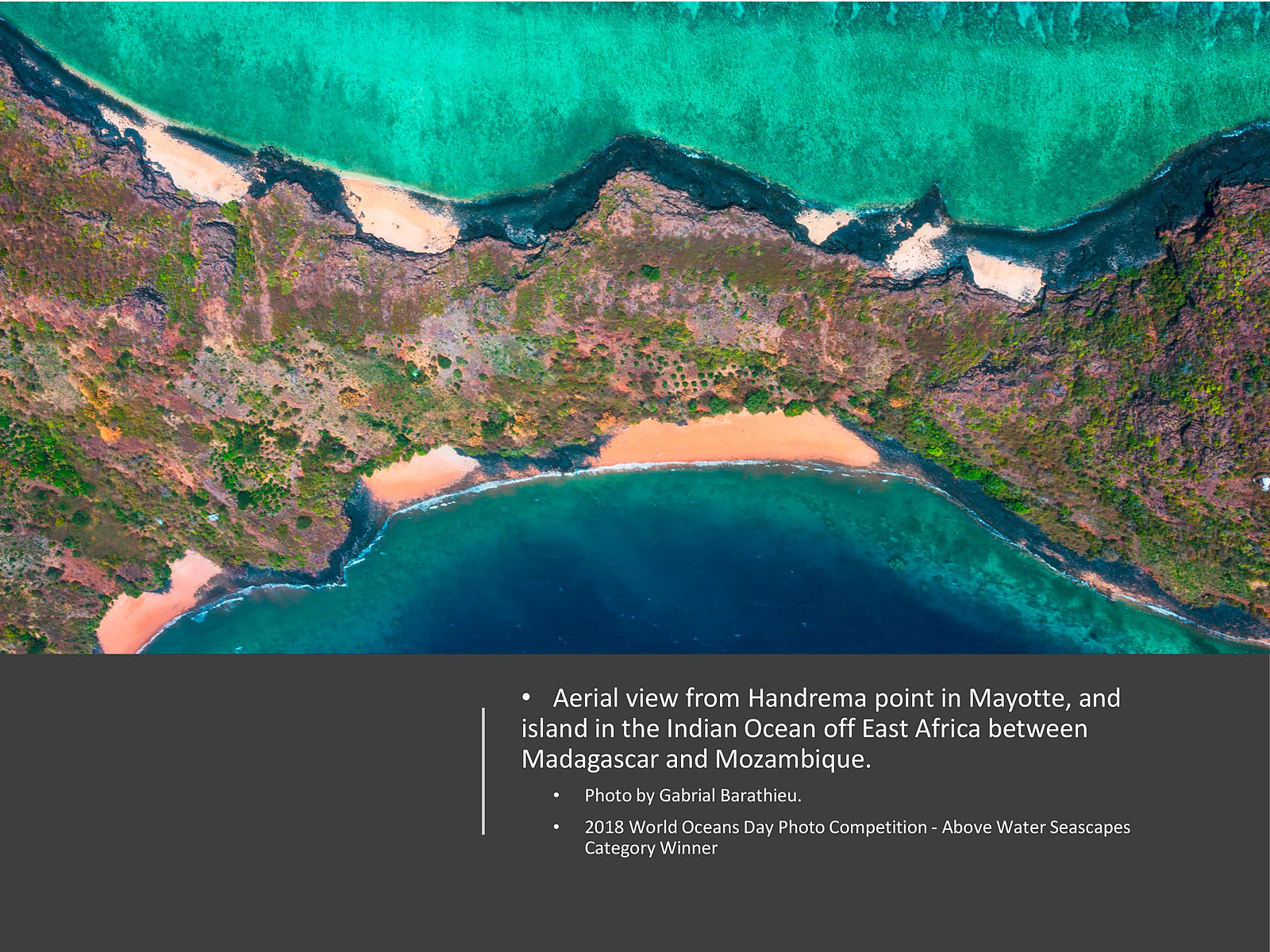 This year, the theme for World Oceans Day is “Gender and Oceans”, which provides an opportunity to explore the gender dimension of humankind’s relationship with the ocean.

• The importance of gender equality, in particular for the effective conservation and sustainable use of oceans, seas and marine resources is increasingly being recognized. A concerted action towards gender equality and the empowerment of women and girls needed in all ocean-related sectors to achieve Sustainable Development Goal 5.

• In the image on the left a female octopus vulgaris (common octopus) sits with her eggs. Females rarely leave their eggs and usually doe not feed during the entire period of spawning and brooding, which can be as long as 4-5 month. Egg care includes cleaning the eggs with the arm tips and directing jets of water from the funnel through the strings. As a rule, females die shortly after the hatching of the last embryos after losing one-third of their pre-spawning weight.*

– *University of Michigan Museum of Zoology. 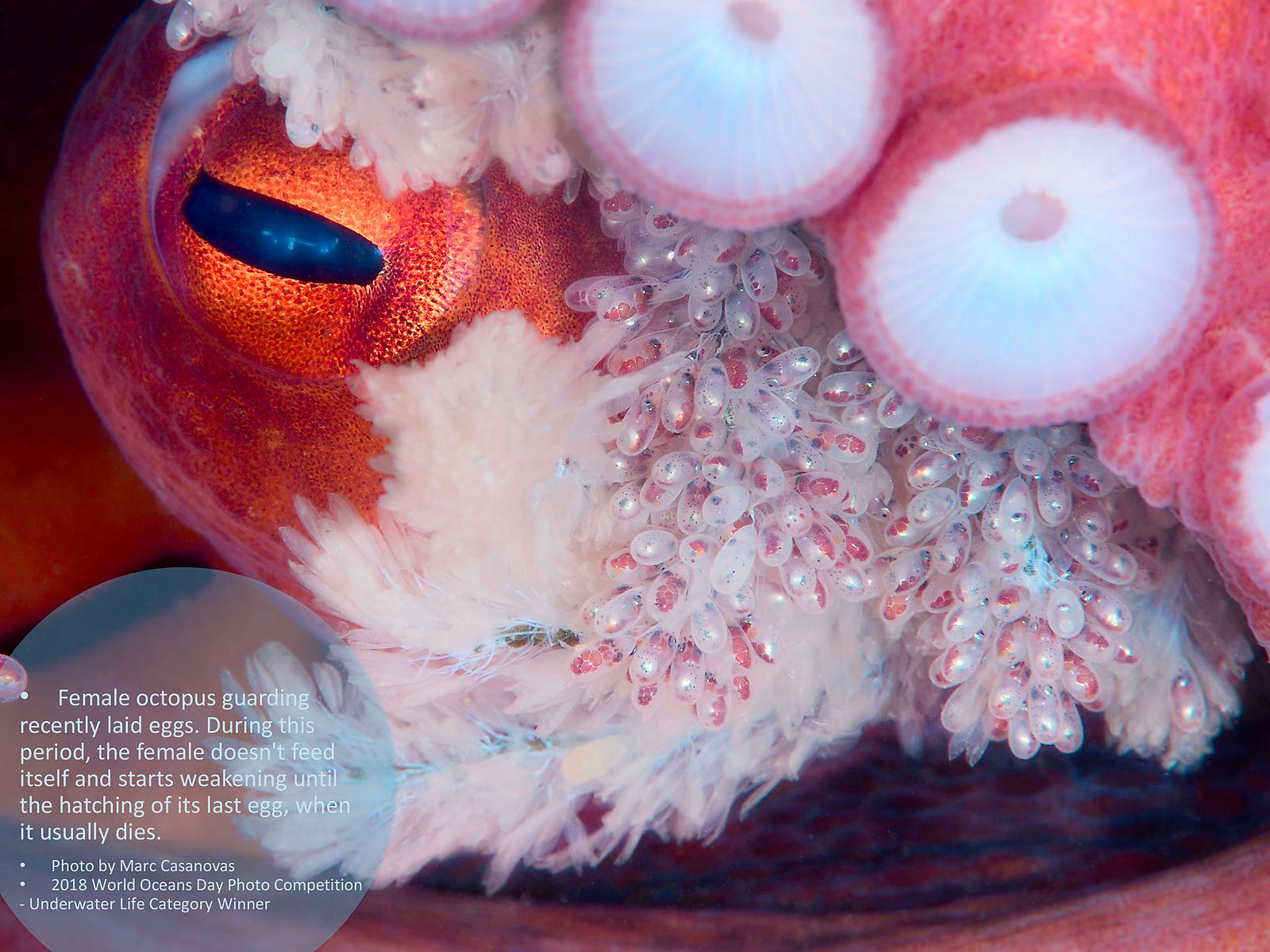 • Marine debris is present in all marine habitats, from densely populated regions to remote points far from human activities, from beaches and shallow waters to the deep-ocean trenches. The amount of debris in the marine environment is a cause for concern. It is known to be harmful to marine life, it presents a hazard to shipping (propeller fouling), it is aesthetically detrimental, and it may also have the potential to transport contaminants over long distances).

• Marine debris, and in particular the accumulation of plastic debris, has been identified as a global problem alongside other contemporary key issues, such as climate change, ocean acidification and loss of biodiversity. Marine animals become entangled in debris, and even mistake it for food – often killing them. In the image on the right an endangered green turtle has been hooked and left to die in an abandoned fishing line. 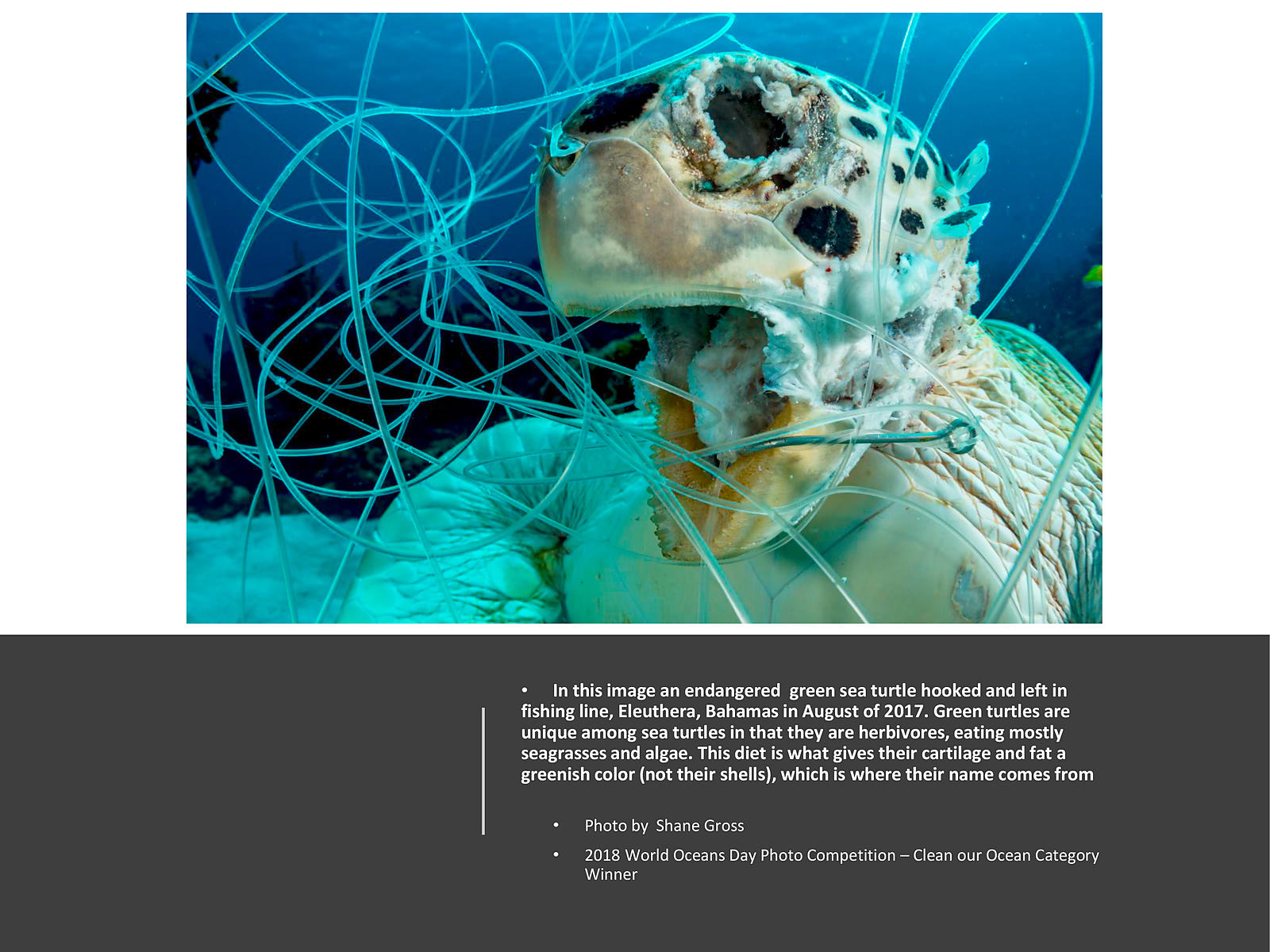 Everyone needs to do their part

Humans can also be the solution to problems like marine debris. In the image on the left, young divers in Manly Cove, Sidney, Australia take part in an a local ocean cleanup to promote Project AWARE’s 'Dive Against Debris’ program.

The program empowers scuba divers to remove marine debris from their local beaches and oceans and report data on the types, quantities and locations of materials collected. Since the program’s launch in 2011, more than 50,000 divers have participated in Dive Against Debris in 114 countries around the world, reporting over 1 million pieces of trash.

"Everyone needs to play a part. You can make a difference today – and every day -- by doing simple things like carrying your own water bottle, coffee cup and shopping bags, recycling the plastic you buy, avoiding products that contain microplastics and volunteering for a local clean-up.“ 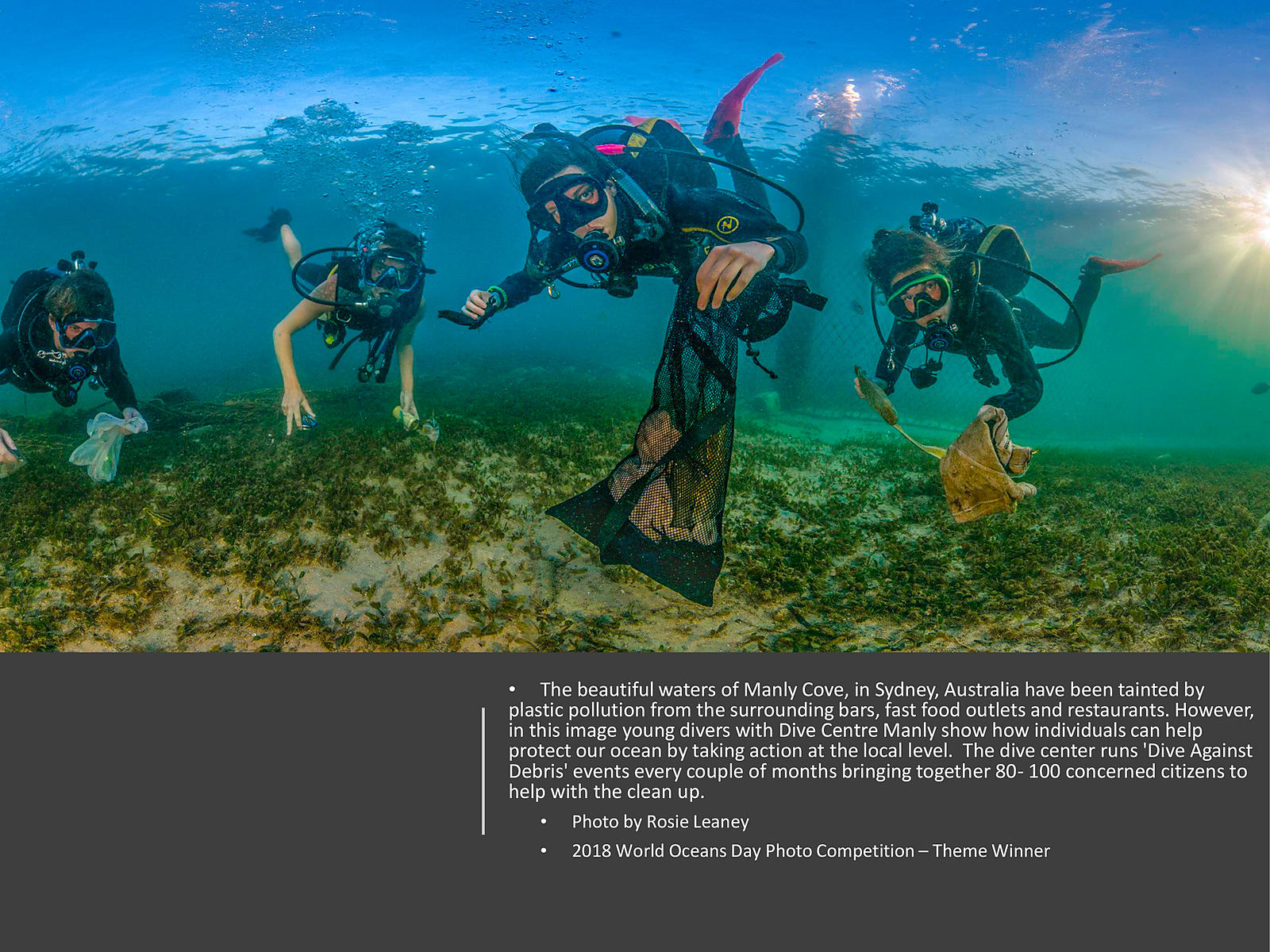 Domenico Tripodi is an Italian photographer based in Reggio Calabira.

Grant Thomas is a Scottish award winning international photographer who dedicates his life to capturing mother natures finest moments. In 2018 he was named British Underwater Photographer of the Year.

Gabriel Barathieu spent his childhood alongside the Atlantic ocean in Landes, southwestern France. He has published in various specialized underwater photography publications and pursues professional photography alongside a passion for scuba diving. He now lives and works in Mayotte Island.

Shane Gross is a marine conservation photojournalist, using images of the underwater world to benefit the ocean. Currently based in the Bahamas, Shane has done some great storytelling work on the importance of mangroves as nurseries for the Bahamian sharks.

Rosie Leaney is a photographer based Manly Cove, Sydney, Australia. 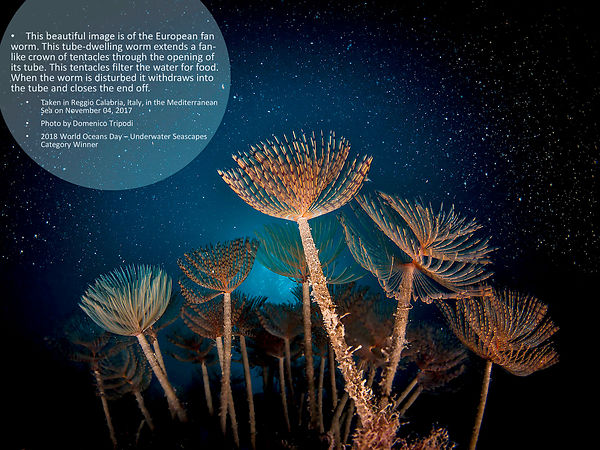 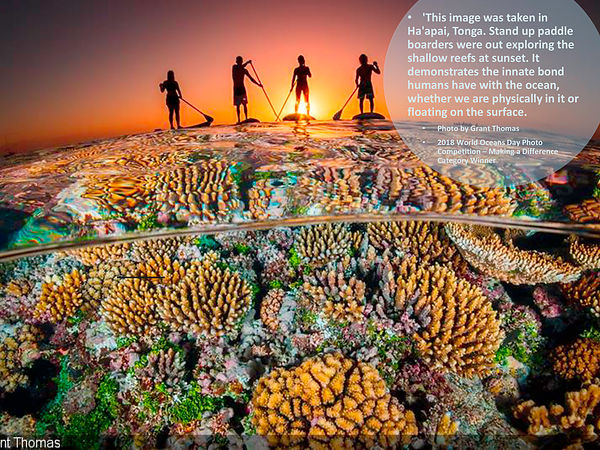 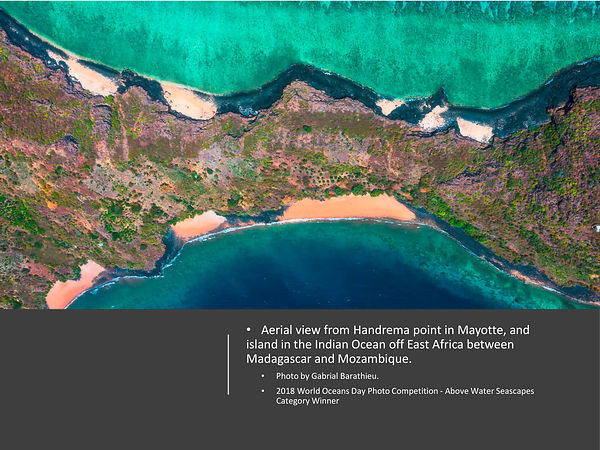 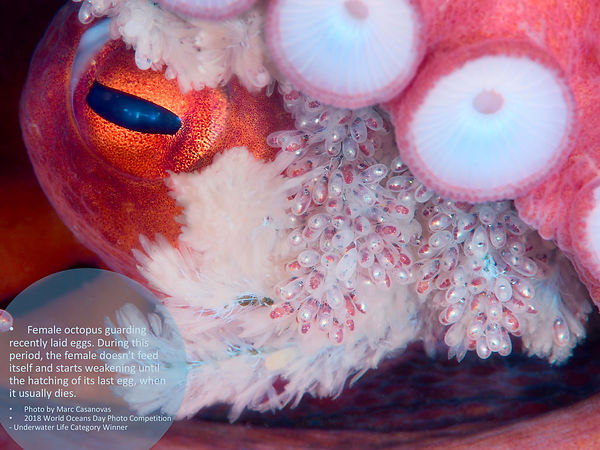 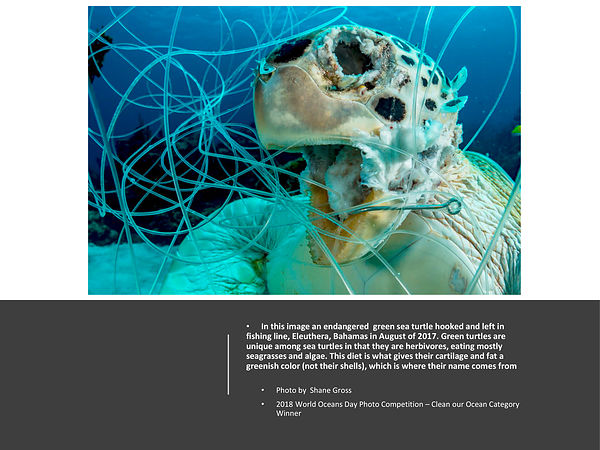 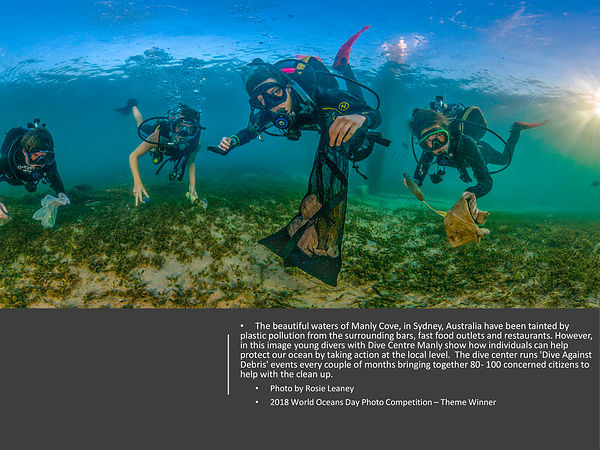