The post-treatment of an underwater photography: Part 1

The post-treatment of an underwater photography: Part 1

The how to of underwater photographs post processing using lightroom

As I said earlier , the development of a RAW file is a set of actions. They aim to optimise and adjust some components that can’t be realised during shooting time.

I will describe, the process by steps and will walk you trough all the actions needed for post-processing for underwater photography. As we will progress you will be able to do a before/after comparison:

This photo was taken towards the end of a dive in Mayotte’s “Passe en S.” It’s a backlight photograph, therefore with a huge dynamic.

First , open your photo in Lightroom and click on the ” Development ” tab .

You should have this interface : 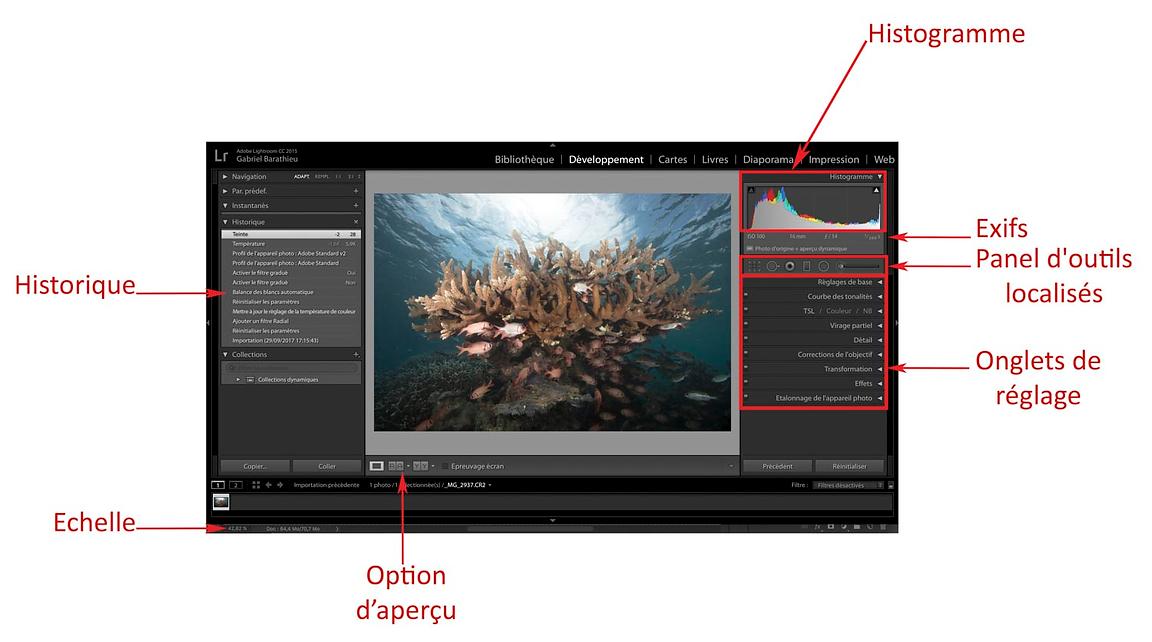 Here are the elements or the group of elements that will spare us to work on this file :

The histogram : it is at the top right. You can see how to use it by reading my article “The Fundamental Technics of photography“. This histrogram will evolve as we are processing the image, each of our action will affect it.

The exifs : these are the informations provided by the camera ( Shutter speed, aperture , ISO , but also the focal lenght and the lens used , here a 16-35 @16mm)

The localised tools : this group of tools will allow you to crop, correct the horizon, fix the white balance (very usefull in submarine photography), use gradual filter , and make a bunch of local adjustments.

Preview option : it’s a very useful tool that allows you to have a before/after view of the modifications, there are several types of displays

Zoom : An essential tool that allows you to make back and forth zooms on the picture

First of all , let’s deal with a few permanent settings :

I am talking about the colorimetric space , and the base profile from which we will start working and eventually transfer our images to photoshop after developping the RAW.

We are going to be working with ProPhoto RGB so to speak the most extended that lightroom has to offer.

Even thought most of the screens isn’t able to display the total range of colors that this space has to offer, it’s important to use it, in order to have more color shades.

It’s even more true in underwater photography where there is a lot of shades of blue . This space will allow you to improve gradient and better transitions between each tints.

You also have to select a color depth of 16bits/layer . But becareful that no crop occurs.

You will get this tab : 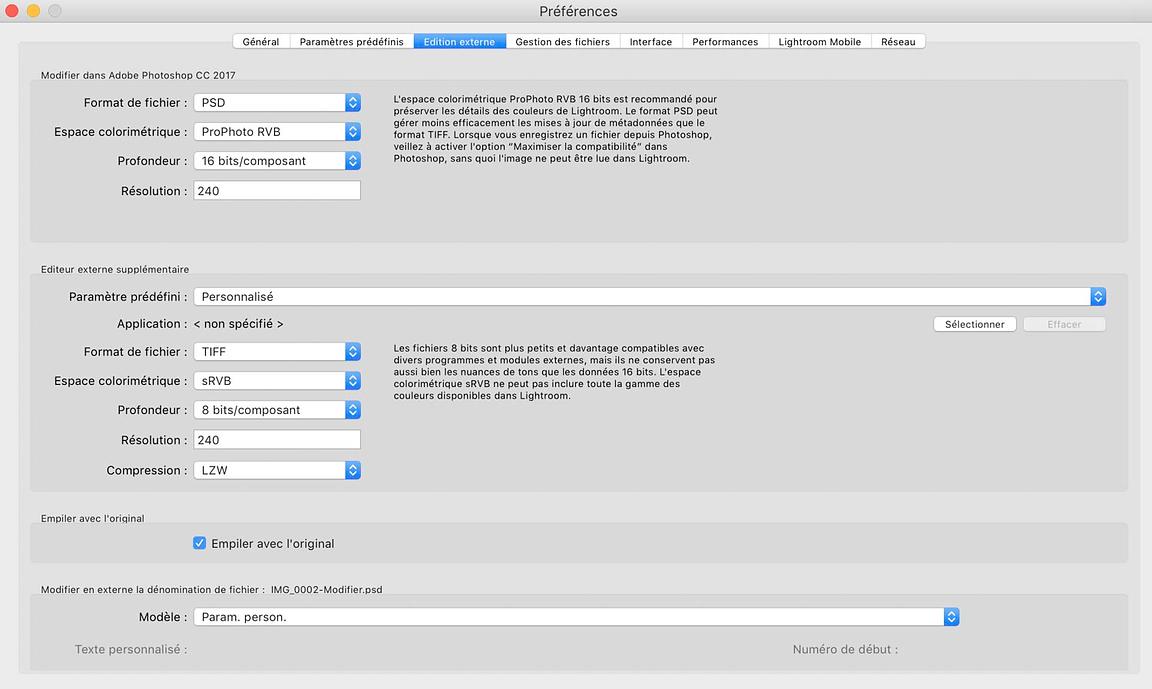 Before starting your post-processing

you have to select the profile that you will use as a base.

In order to better understand what profile you can use , you can read my article on the RAW format using the link at the beginning of this article.

To select this you need to click on the last tab : Camera Calibration

Once this tab is opened , a panel of sliders will be available.

Let’s focus at first on the menu : 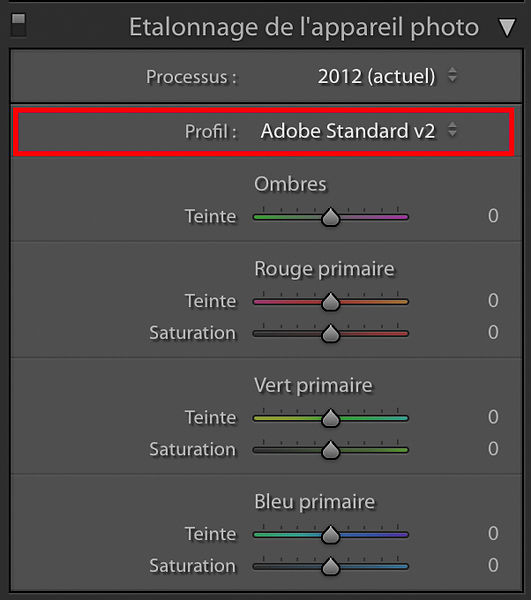 These interpretations are in fact called profiles

Some are even available from your camera ( Landscape , Portrait , etc )

Others are profiles created by Adobe.

The original rendering may be very different from the final one depending on the profile you choose.

Here , the goal is to select the profile that looks as neutral as possible in order to master your post-processing better.

In order to do so , here is a small comparaison between the different types of profiles available. 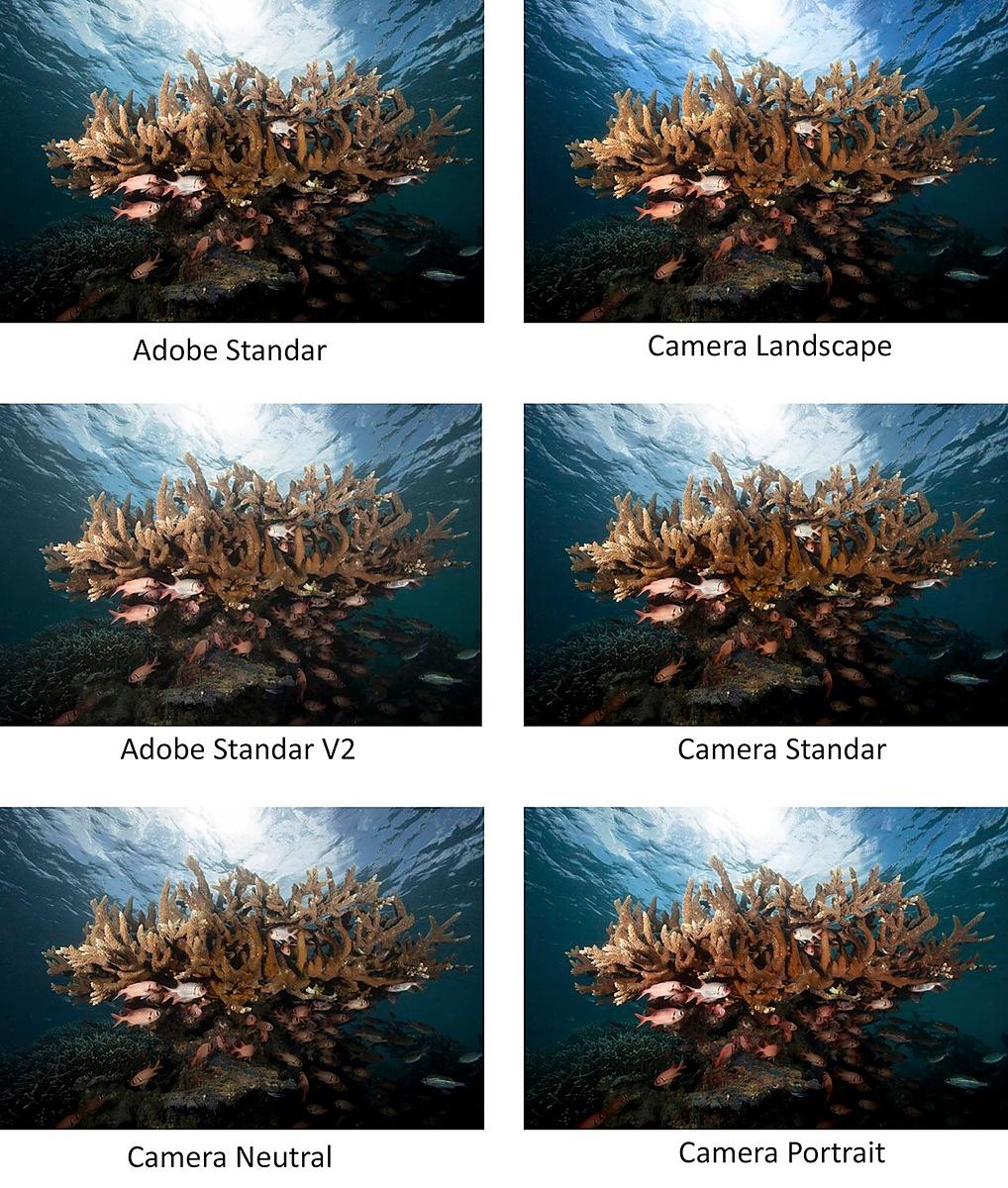 You can notice that the rendering is totally different , both on contrasts and colorimetry.

Some such as the the Camera Landscape profil have very contrasty and very saturated colors , not too much of my taste!

I always select the Adobe Standard V2 Profile . It’s the profil that offers me the most details, that’s the most neutral in terms of color rendering . The contrasts are also very low which leaves us the opportunity to adjust the contrasts as we wish.

But , nothing is preventing you from choosing another profile as it’s all a matter of appreciation and interpretation .

This RAW file with the previously selected profile is, at it’s natural state, flat and not contrast. This is normal, because these two notions are subjective.

The sensor will record the maximum amount of informations , but , some of them , such as contrat , depend entirely on each and everyone’s taste.

Contrast , just as the exposure are subjective notions

In fact , they depend on our own interpretation and on the rendering we wish to have on our image. This is the reason why a macro photograph on a black background will be underexpose, whereas an atmospherical image , just as this one , aims to show a scene as a whole , and the exposure has to be spot on !

What’s the first action of this post-processing flow ?

In this case , it’s capturing as much data from the blown out or the shaded areas .

It’s depending mainly on your sensor’s dynamic range.

The newer your sensor is , the bigger the dynamic range, and therefore the more data you will be able to retrieve.

But this solution knows it’s limits

You have to expose your photo properly, and adjust your flash power in order to reduce the post-processing time, and therefore the amount of informations you have to retrieve.

On this image , you can see that no areas are shaded , meaning , none of them are totally black .

Only a slight part of the sun is blown out.

We can conclude that a well exposed picture doesn’t require you to play around the the exposure’s slider.

Tip to identify these shaded areas or the blown out parts

By clicking on the two small buttons at the top of the histogram , the software will color in red the blurned out and in blue , the enshadowed areas .

We notice on this example that there isn’t any part to get back in the blacks.

Only the area next to the sun is a little burned out . 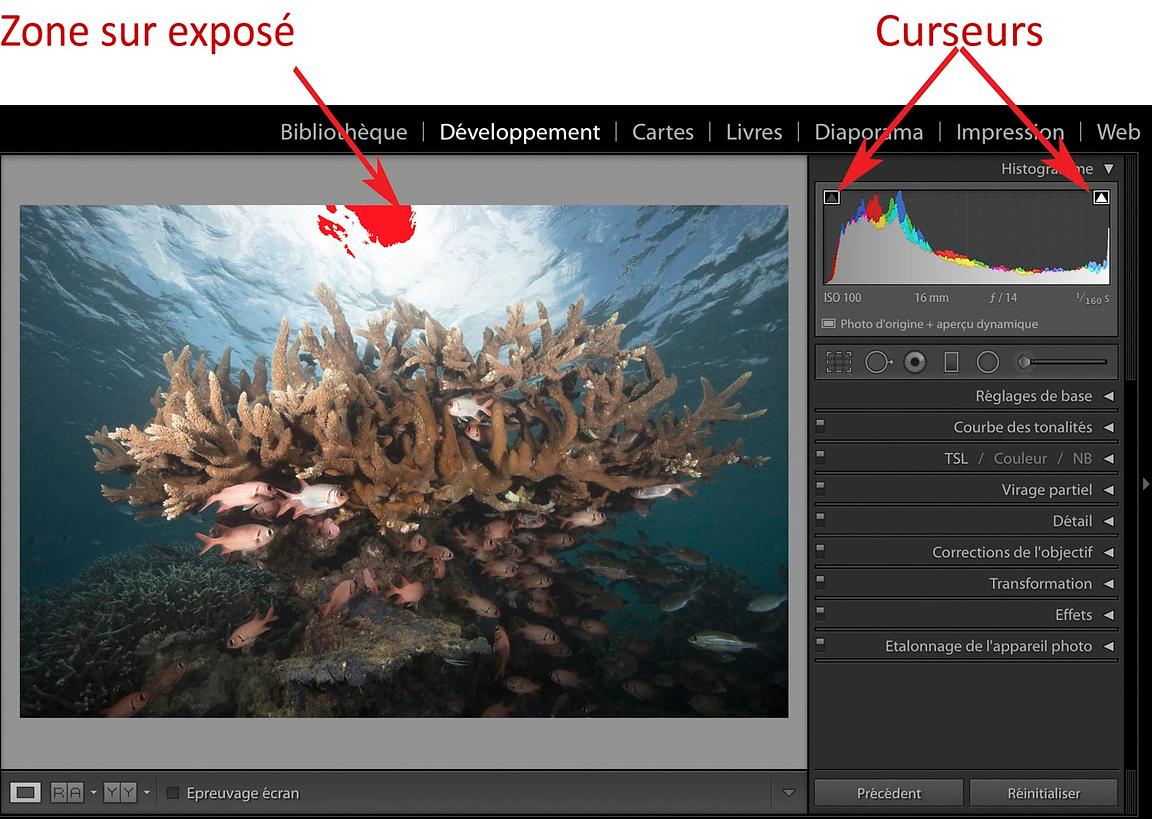 The next step requires you to play with the other sliders of this same tab !

Before going further , here are some little precisions on the tab we are dealing with : 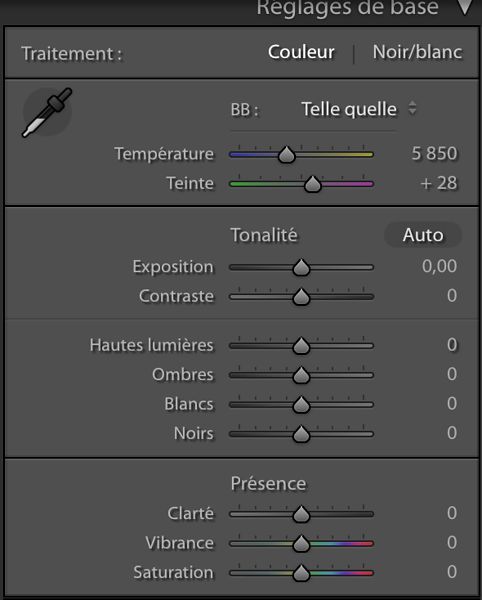 Exposure : The overall brightness of the image . The exposure’s value are increments equivalent to the value of a STOP of light on your lens . If you add +1,00 , it’s just as if you had your aperture a step higher . If you do -1,00 it’s just like if you had shut down your aperture by a stop.

Tons clairs : Bright tones : Deals with the bright parts of the image . Move this slider to the left to darker these tones and retrieve some details in the blown out parts of your image . Move it to the right to brighten then while minimizing the clipping.

Dark tones : Deals with the dark parts of the image . Move this slider to the left to get your dark tones even darker while minimising the clipping . Move it to the right to brighten up the dark tones and retrieve some details in the blacks .

Whites : Deals with the clipping of the white tones . Move it to the left to reduce it , move it to the right to raise it .

Let’s try to back up some informations around the sun , the brightest part of the picture, without overdoing it.

In order to do so, use the white tones slider, and push it to the left. 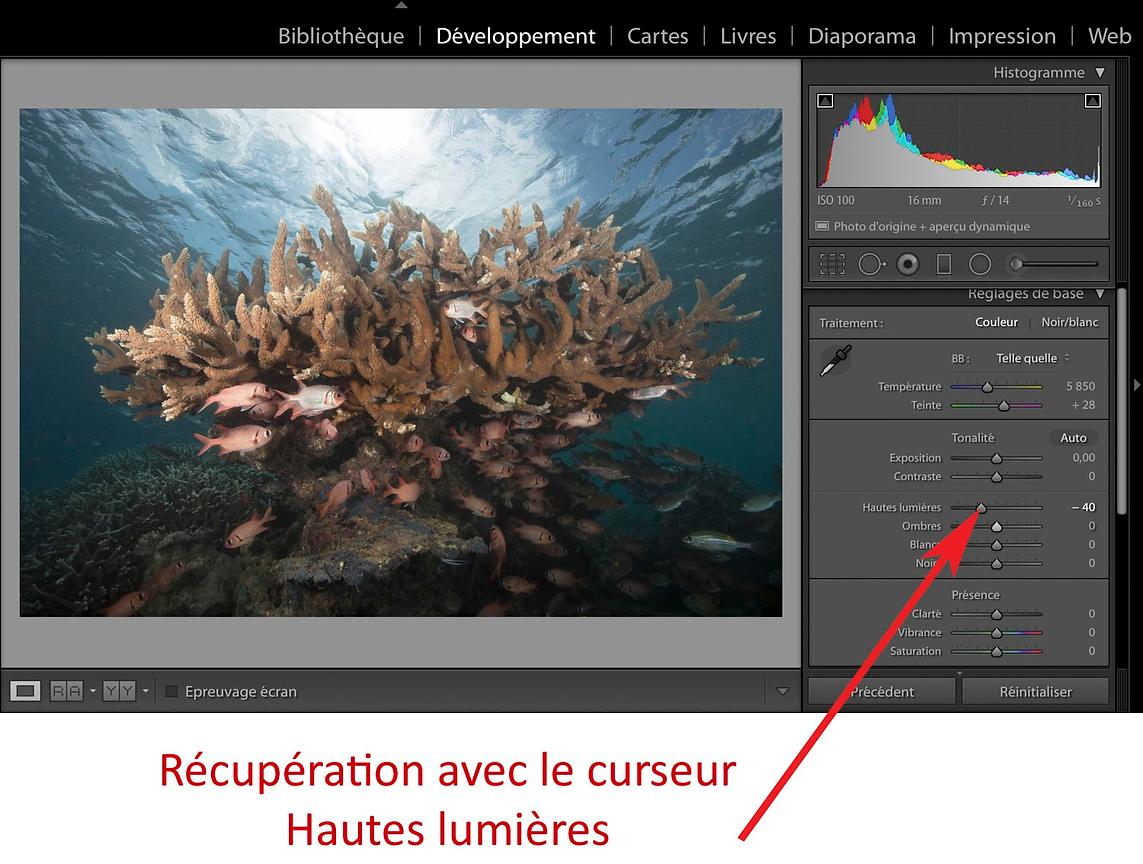 The slider being at -40% , we notice that the overexposed zone isn’t red anymore.

We can also notice that this action impacts the other bright zones of this image , such as the clouds next to it .

Once these informations are brought back , the next thing on your to do list is the overall contrast of the image !

The most simple solution is to vary the contrast slider. This slider is based on a preset that modifies the tonal S curve.

This solutions gives you little to no margen, and it’s a lot less precise than directly playing with the tonal curve, yet, most of the time, the result isn’t bad .

Dealing with the overall image contrast using the contrast slider. 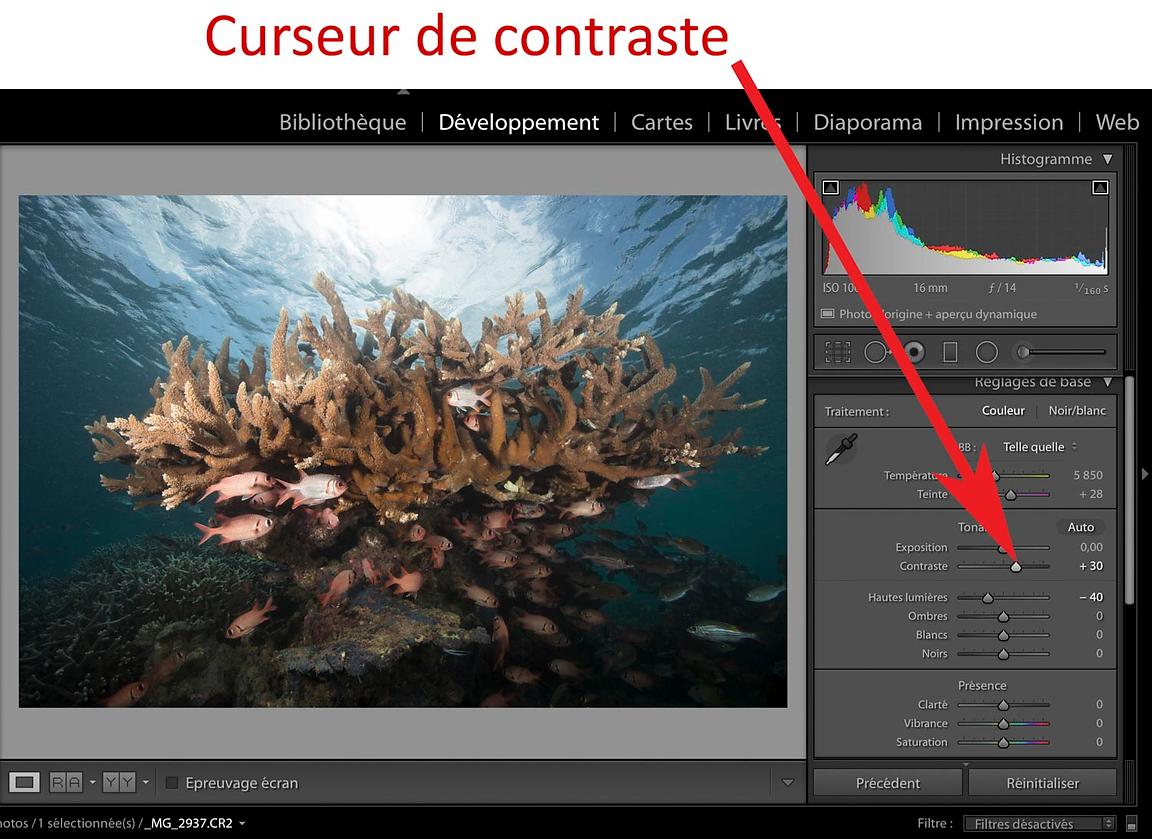 We notice that using the before/after view , the image is a little more contrasty : the washed-out effect of the image is gone and we can start to see some depth.

Dealing with the overall image contrast using the tonal curve. 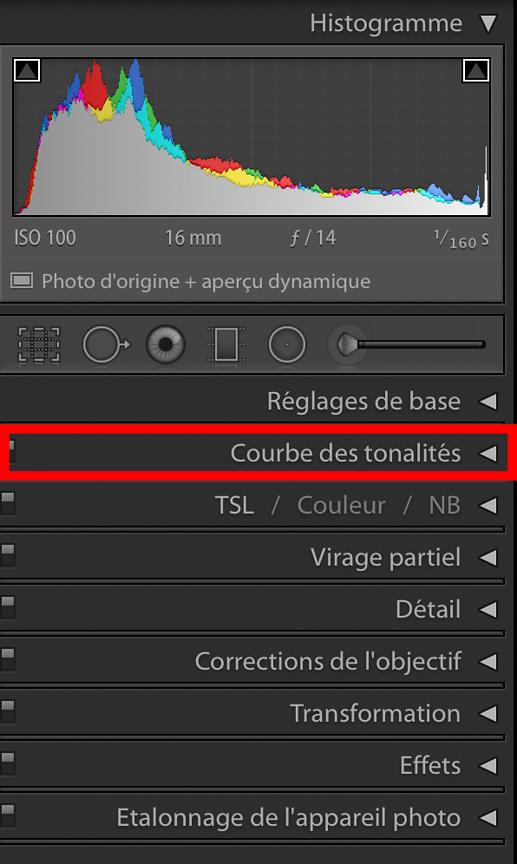 It’s another method to adjust the image’s contrast. But before going further , let’s get some pointers :

The tonal curve is a very important tool regarding the contrast setting.

On the contrary of the contrast slider which is the basic tool , we can play with the contrast a lot deeper by selecting a set of tones from the curve .

We also can play with the bright areas without having any fallovers on the darker sides and vice versa. 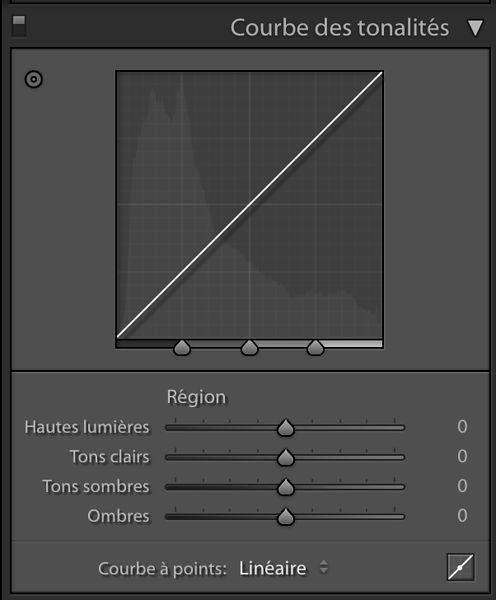 Here , let’s see the curve without any modifications on it.

The neutral point is at the middle of the square.

All the curve under this point concerns the dark tones , whereas anything above it represents the bright tones. 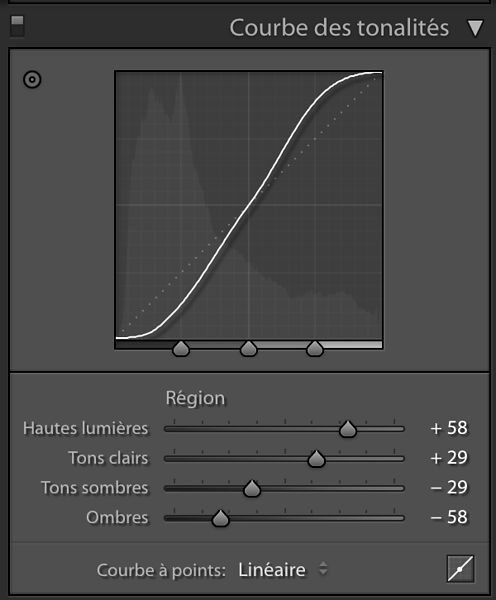 Here is the typical shape of the curve I work with :

The S shape does the following

Brightens the higlights , to get higher theHere , I exagerated the settings on purpose to showcase my point

The point methodes to modify the curve using lightroom CC

Using this methode , it’s possible to create as many points as you wish to vary the curve as you wish

Try this out when you get home !

Below , the contrats have been adjusted using the tonal curve method.

It gave it a little “juice” in the highlights and I darkened the darkests parts of the image .

The photograph gains in dynamism and the washed-out effect is gone . The post-processing is starting. 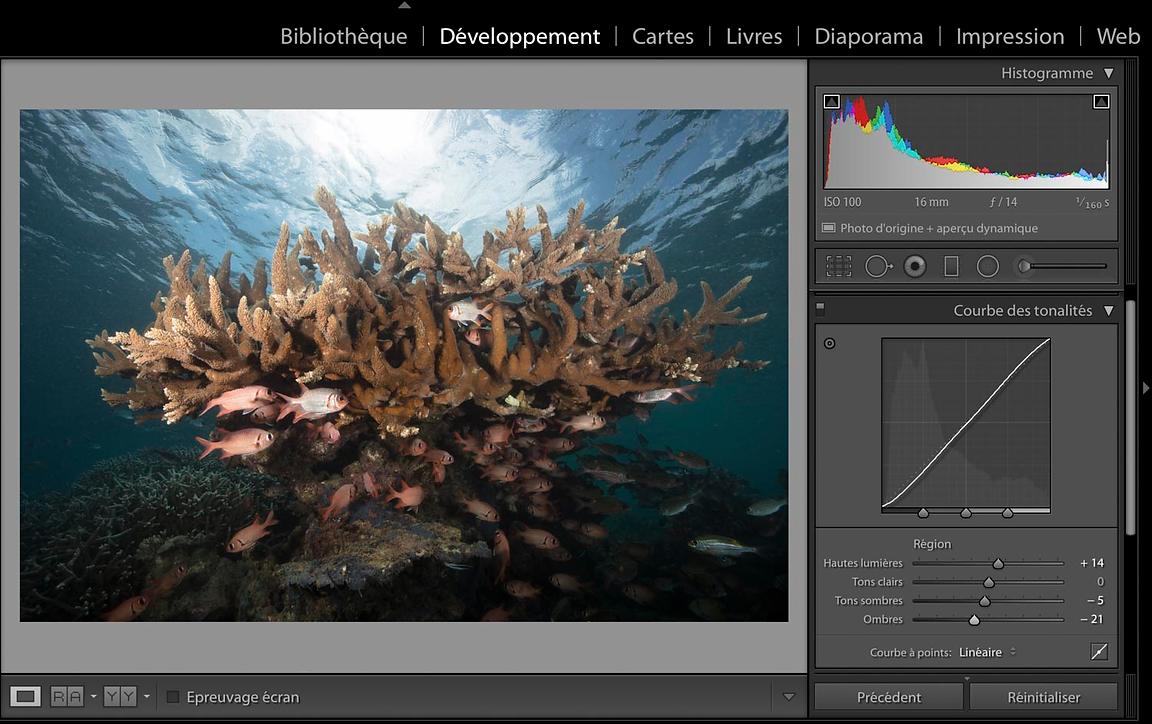 Notice : adding contrast will influence both, the least and most exposed areas of your image

The more contrast you add the more informations you will lose at both extremes.

The goal is to find the right balance, the main one being the “mood” the atmosphere or the environment that you are willing to bring to your image.

For the rest of the image, let’s keep changing the contrats with the tonal curve, but make sure that you kept the contrast slider, from the first panel, to 0 . 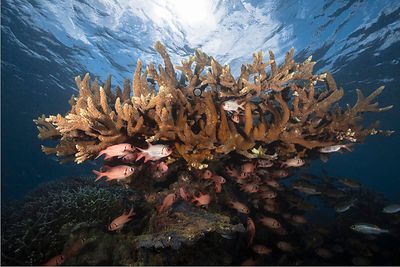 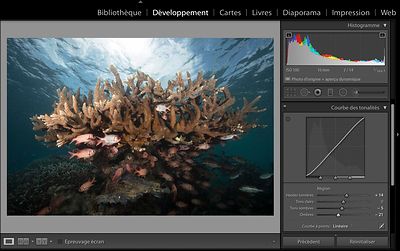 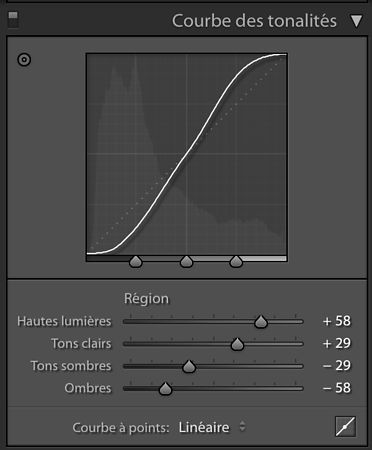 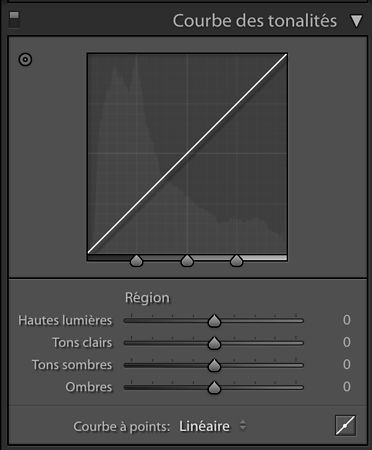 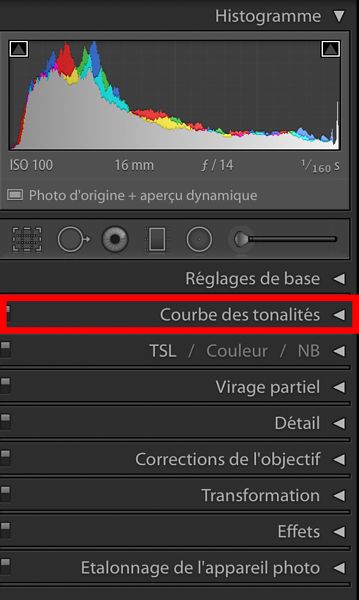 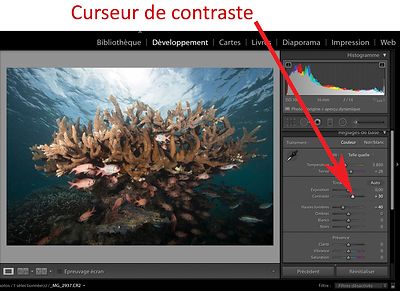 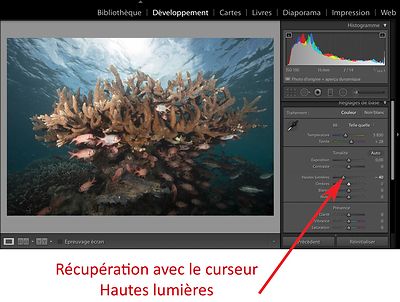 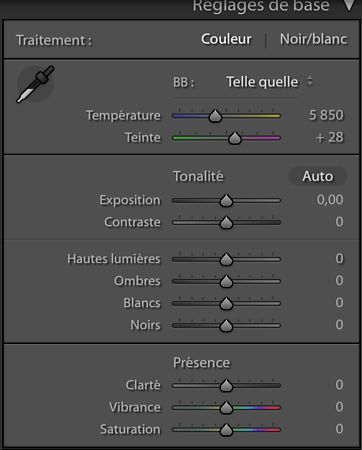 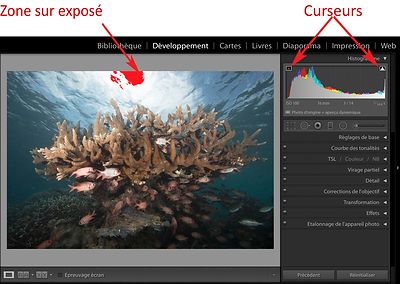 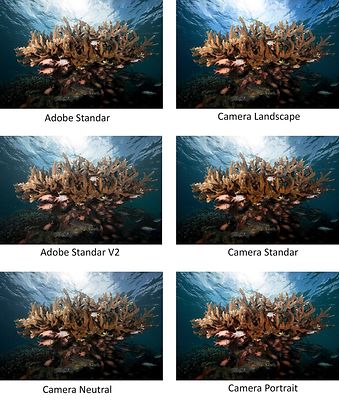 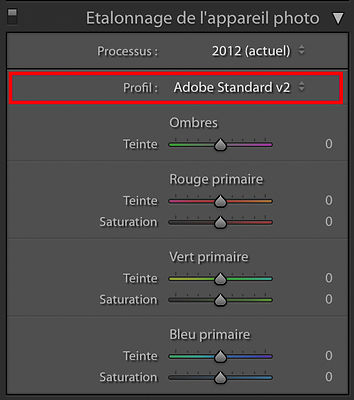 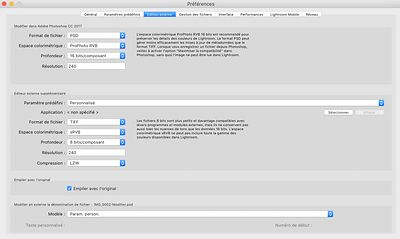 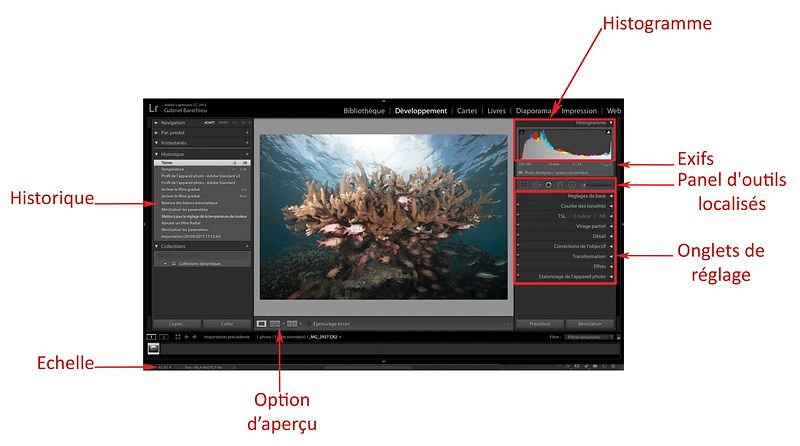 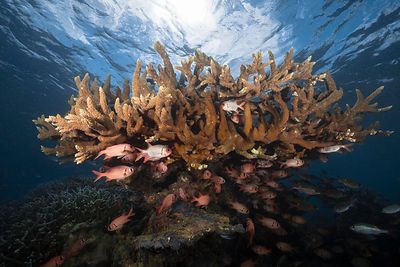 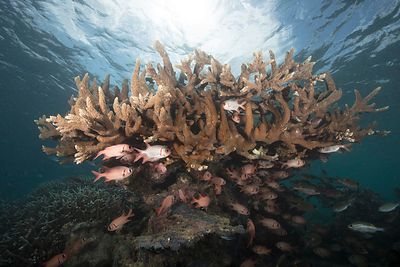 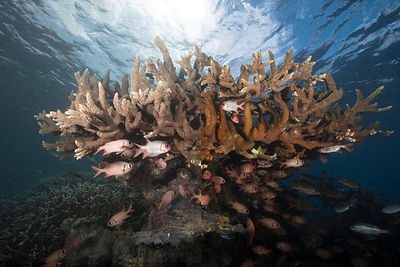