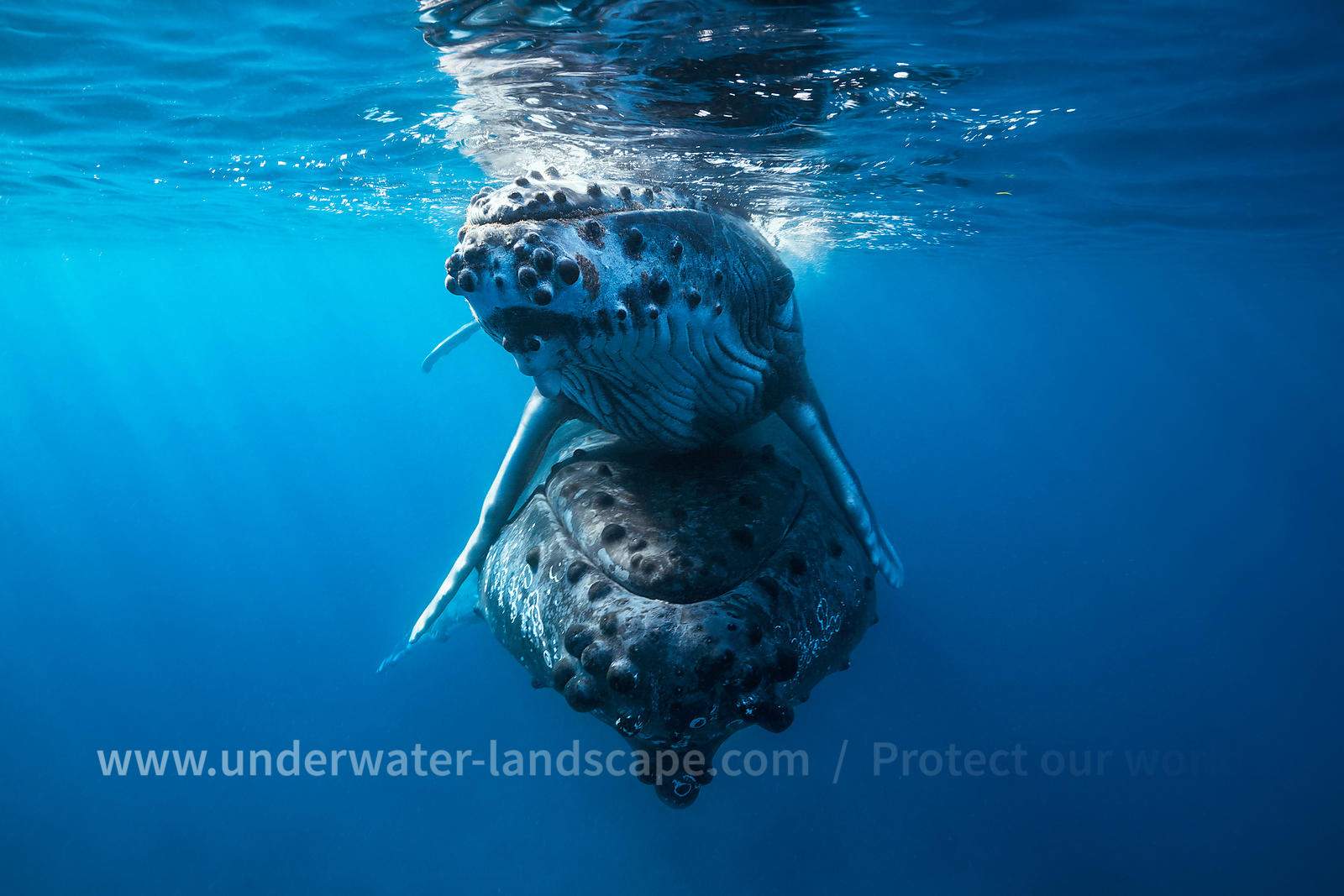 The humpback whale: a huge cetacean

The humpback whale, also called rorqual (Megaptera novaeangliae) is a whalebone whale. We are talking about a huge cetacean here, with a length around 13/14 meters (44 feet) for an adult specimen, and an average weight of 25 metric tons. They can do spectacular jumps above the water surface, and their calls (the famous whale song) are complex and highly sophisticated. It’s a real treat to hear them during a dive, especially when diving with a rebreather. These enormous cetaceans can be found in all of the globe’s oceans. During the austral winter, they migrate to tropical waters for a few months. 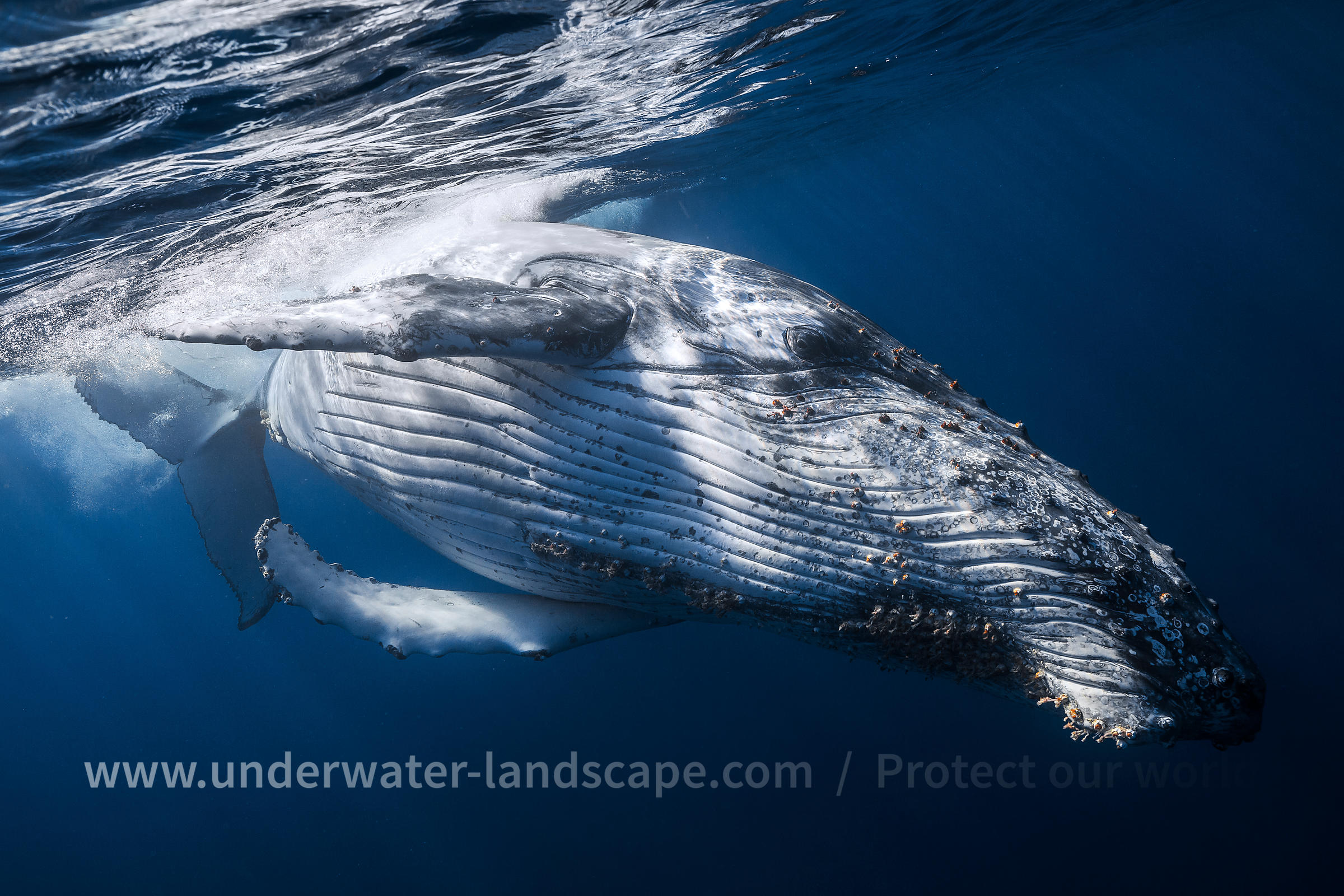 In the Indian Ocean, humpback whales come up from Antarctica with the help of ocean currents. After crossing turbulent latitudes, they take a break in the austral winter’s warm tropical waters, up to the latitude of Kenya, and sometimes even further up. However, there seems to be no contact between the northern and southern poles’ populations. 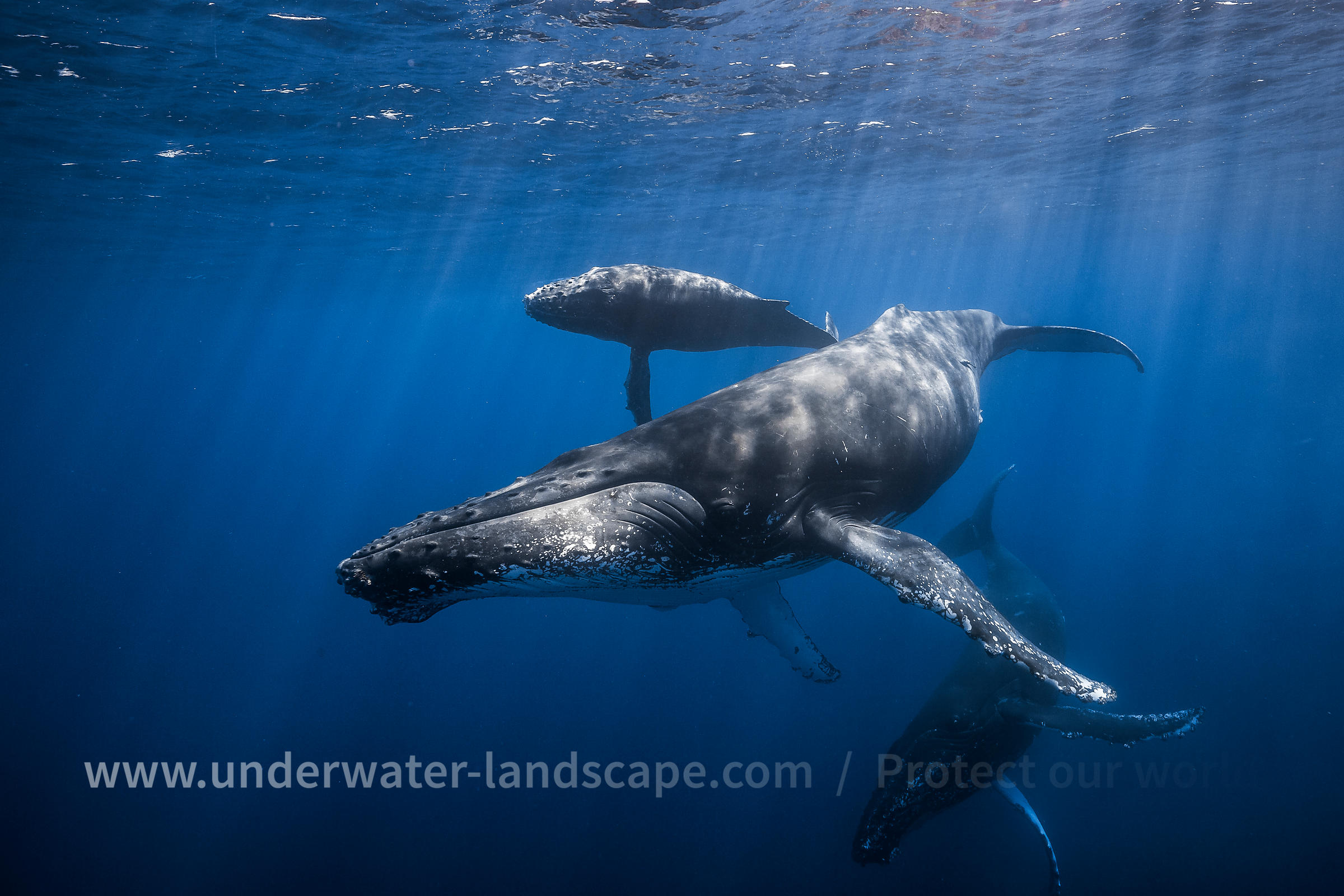 After a long time being hunted for their meat and fat, they almost became extinct because of men. In the first part of the previous century, there were an estimated 100 000 whales around the globe. But their population tragically decreased (by 90%) until 1966, when they became a protected endangered species. Since then, their number has been going slowly up, which is heartening when considering the amount of other species that are dying out.

But nowadays, it is their food sources that are being put at risk by men. 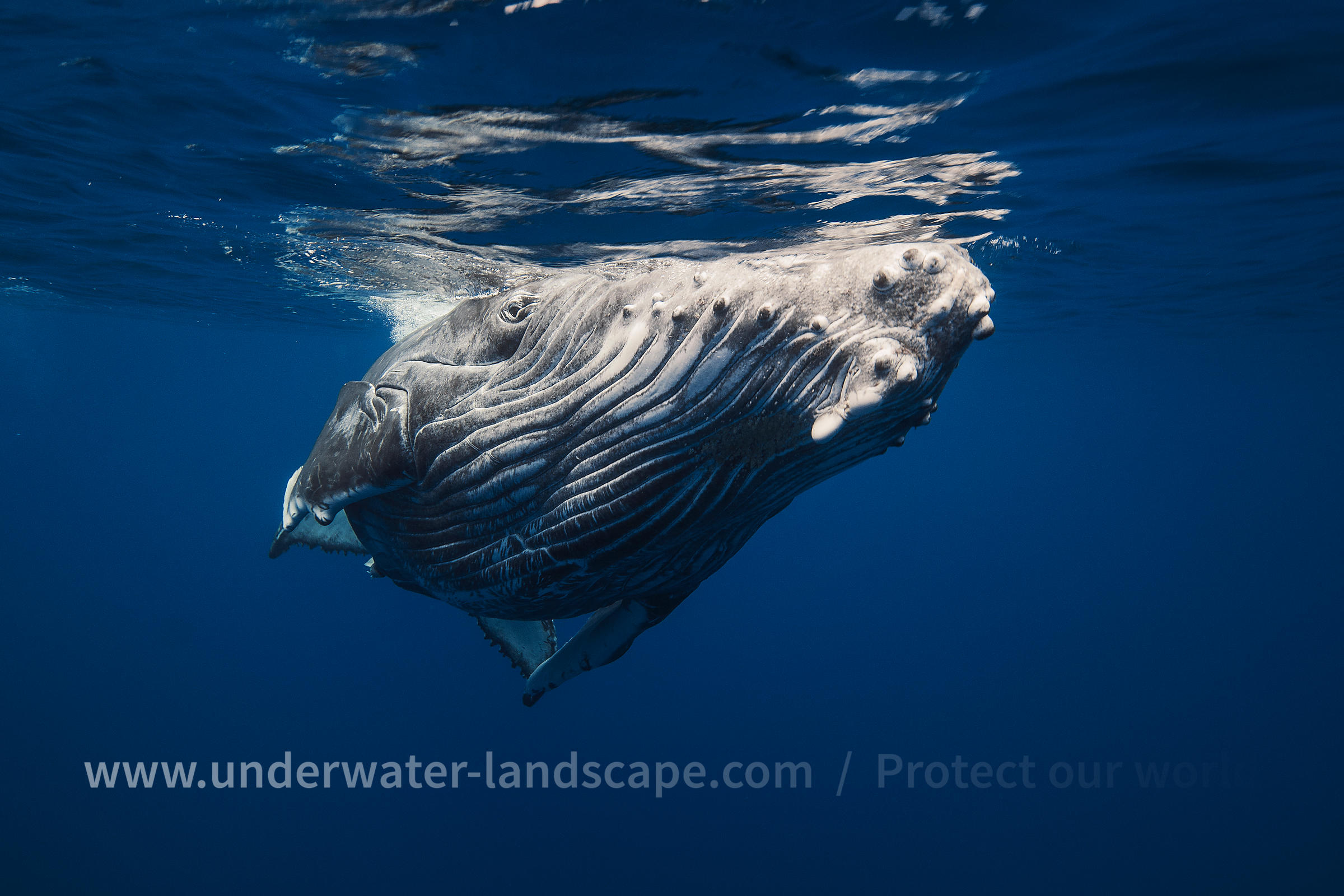 Females are larger than males. They can be recognized by the lobe found in their genital area, which means that they are hard to differentiate from the surface. Except when they are with their youth. The whale calf is 4 meters long at birth (13ft), which makes it quite imposing with its 700 kgs (3,77oz). Nursed by its mother for its first six months, it starts to feed by itself in the next following months. During its second year of life, it becomes what we call an “immature”. They reach sexual maturity after about five years, which is when they leave their mothers for good. Their adult length is around 15 meters for males, and sometimes up to 17 meters for females, for a weight of about 40 tons. 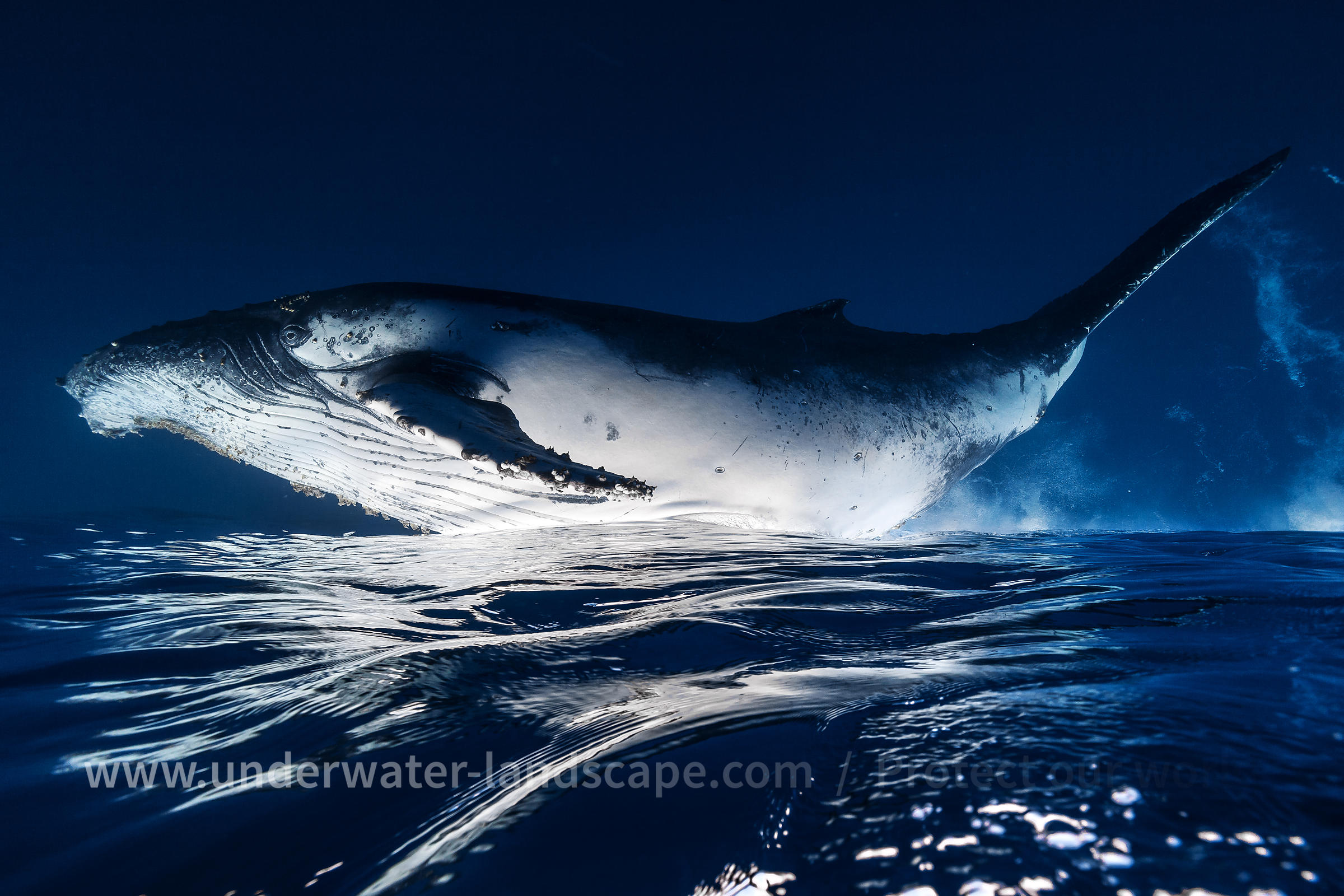 It is estimated that humpback whales can live for an average of between 30 and 50 years, which is quite short compared to the bowhead whale and its 100 years’ life span. These cetaceans spend summer in polar areas (July/August for the northern hemisphere ; December/ January for the southern hemisphere). They stay in these areas to feed themselves, eating krill. They only feed in the summer, surviving on their fat reserves for the rest of the year. On top of krill, they also hunt schools of fish such as herrings and other kinds of small fish. They have several different hunting techniques: they either stun their preys by hitting the water with their tail and pectoral fins, or they surround the fish, in an elaborated strategy, by using a circle of bubbles. When winter comes, they swim up to tropical and subtropical waters to mate and give birth. 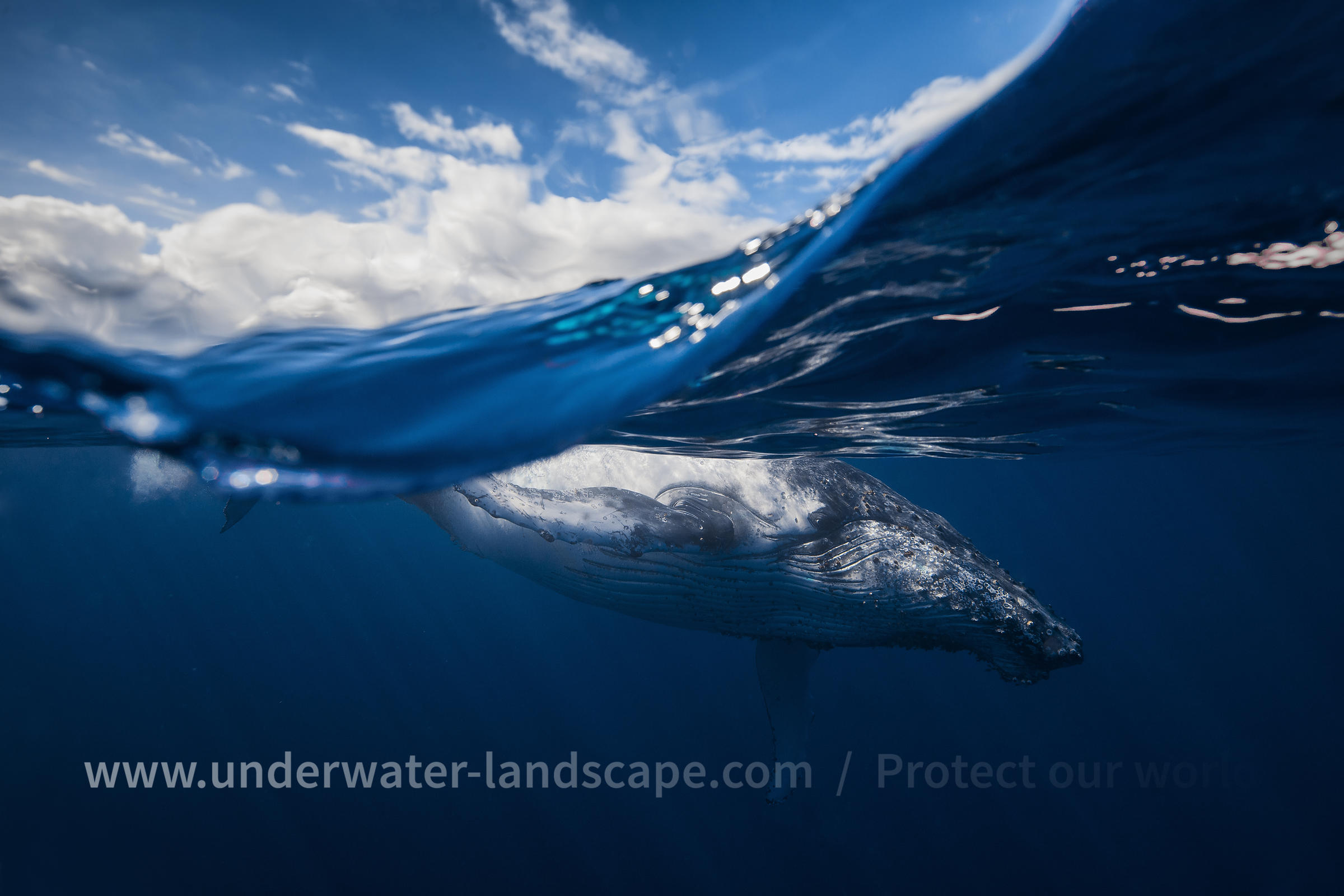 Humpback whales usually live a solitary life. But they sometimes regroup for a while, especially during mating season. That is when their singing can be heard: a powerful and complex sound, they can sing for hours, and even days at time. Only males do it though: they dive, with their head down, to about 30m deep, and produce low notes, with a varying frequency and amplitude. These songs are made of coherent sequences, but not much is yet know about them. 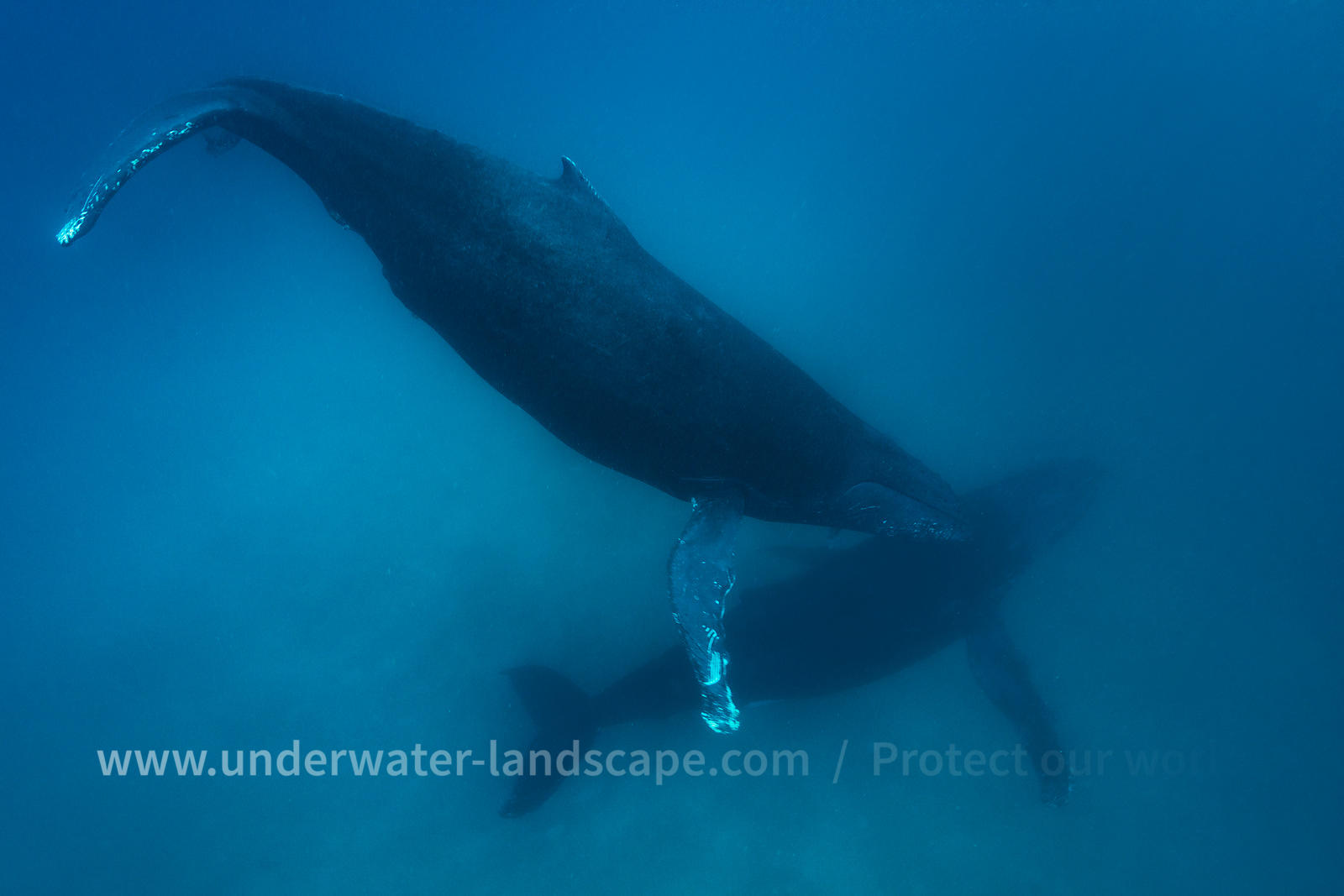 Humpback whales only have one predator aside from men: orcas (also called killer whales)

They mostly attack calves, but when in group, they can also surround a young adult and chase it until its exhaustion: when the animal can not go on any longer, they keep it underwater in order for it to drown. 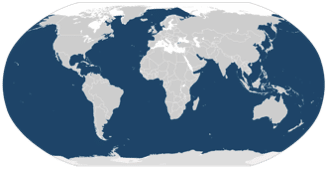 Advices to approach and photograph a humpback whale 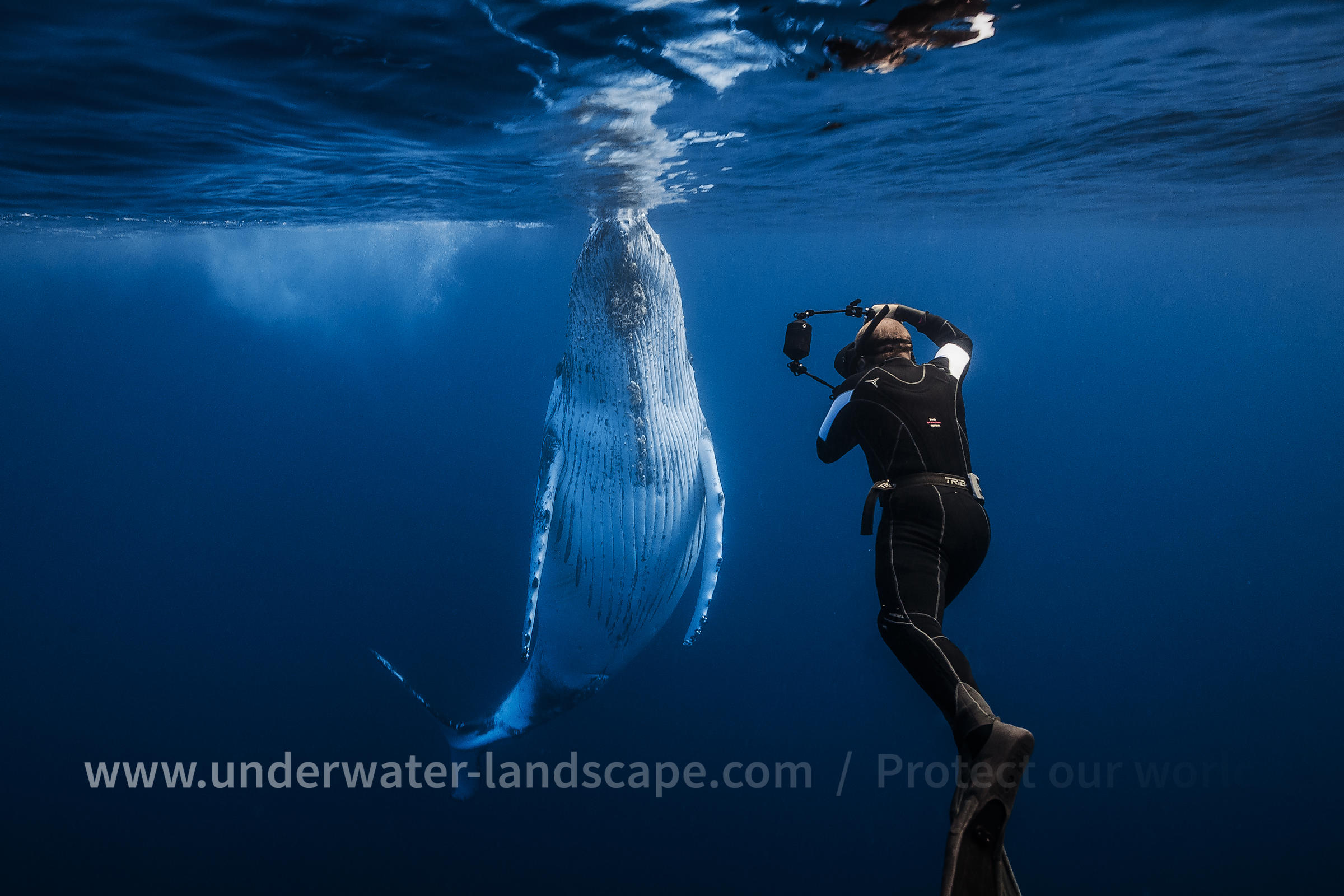 Swimming with humpback whales is not allowed in all countries: the US, Canada, Australia or even Madagascar have rules against going in the water with any marine mammal. In France you can, but it has to be done under strict conditions, as “whale watching” activities can be harmful for the animals. And anyway, when stressed, a whale is going to swim away. Good reflexes and behaviors need to be adopted in order to not disturb the animals and, even better, to be accepted by them. In the Reunion Island and Mayotte, policies have to be followed in order to get close to whales and dolphins. 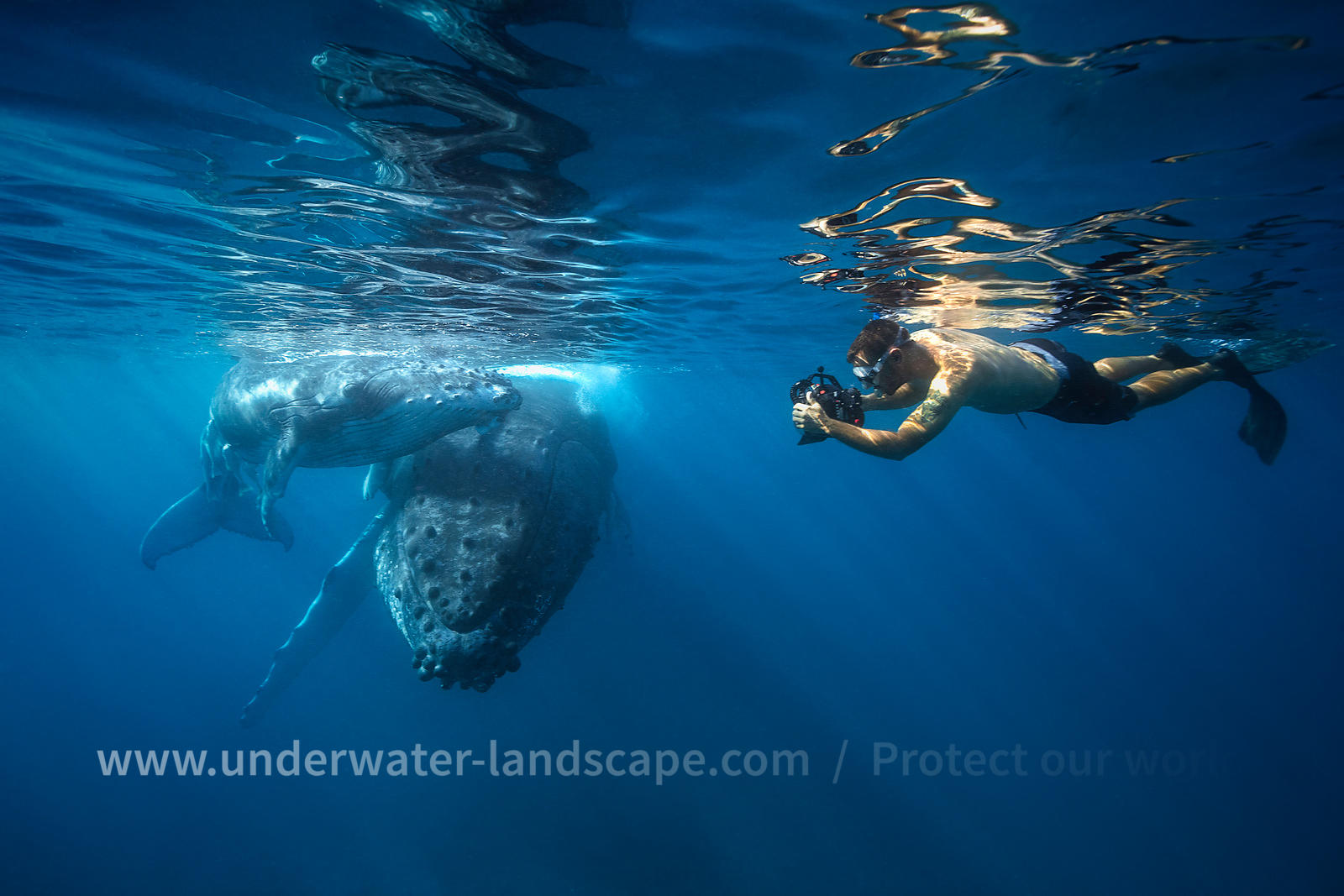 In Reunion and Mayotte, there are charters concerning the approach of whales and dolphins. It is appropriate for everyone to learn before approaching these wild animals. 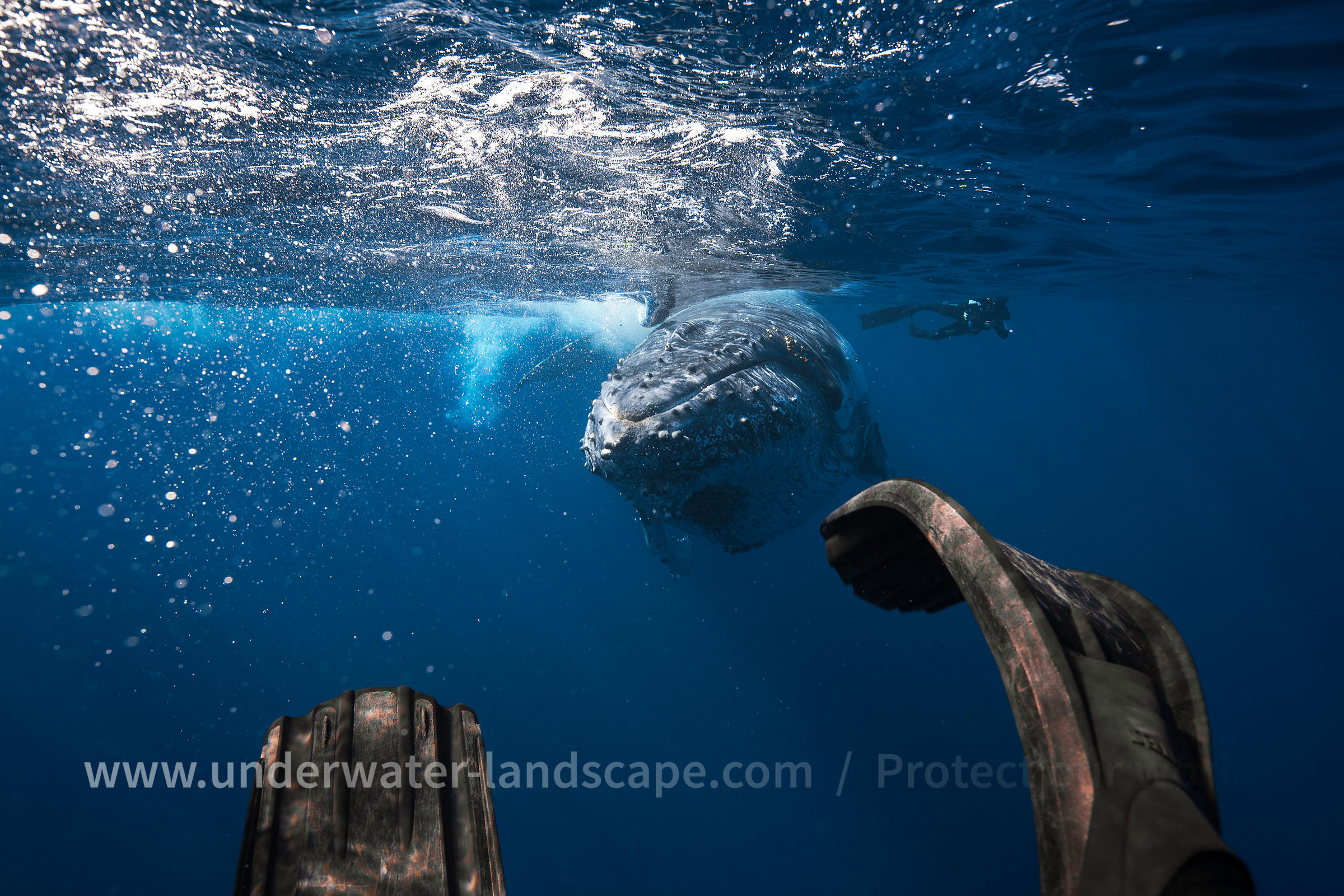 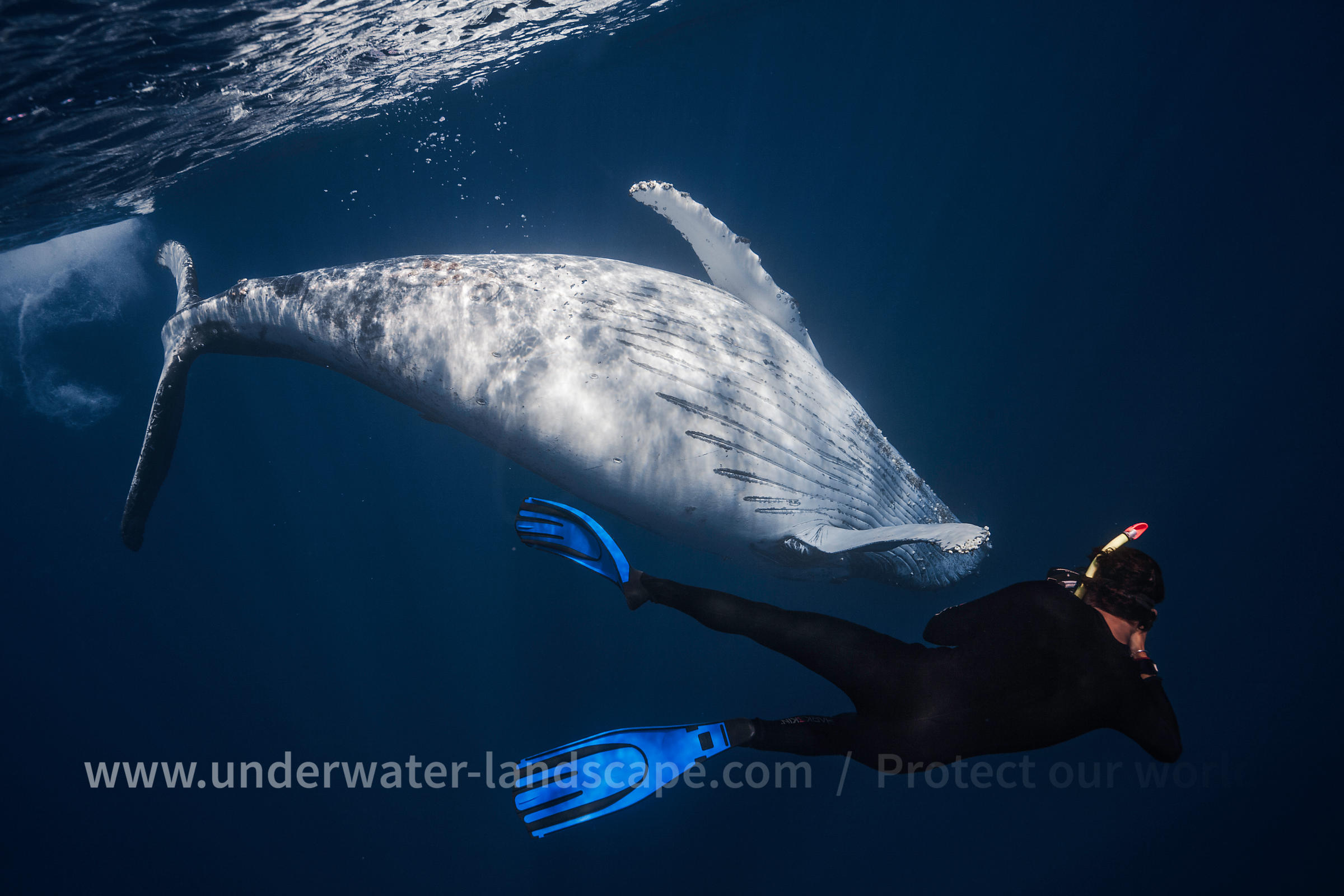 Advices to join them in the water

Here is how I proceed:

Get in the water smoothly, no jumps, no splashes, no screams. Start to swim towards the animal slowly, and check that your fins are completely in the water in order to avoid making noise on the surface (cetaceans such as dolphins and whales hit the water with their own fins to show annoyance, and by doing it yourself you are thus sending them a negative message). When you see them, stay away without moving, you have to be accepted by the animal. If you just swim straight to them, you will make them flee. If you give it some time, and if you are lucky, the whale might come join you: they are curious animals, especially young calves around 1 or 2 months old. Yet even if they are a sensitive and non-agressive species, keep in mind that they are wild animals with unpredictable reactions (especially as they weight several tons) 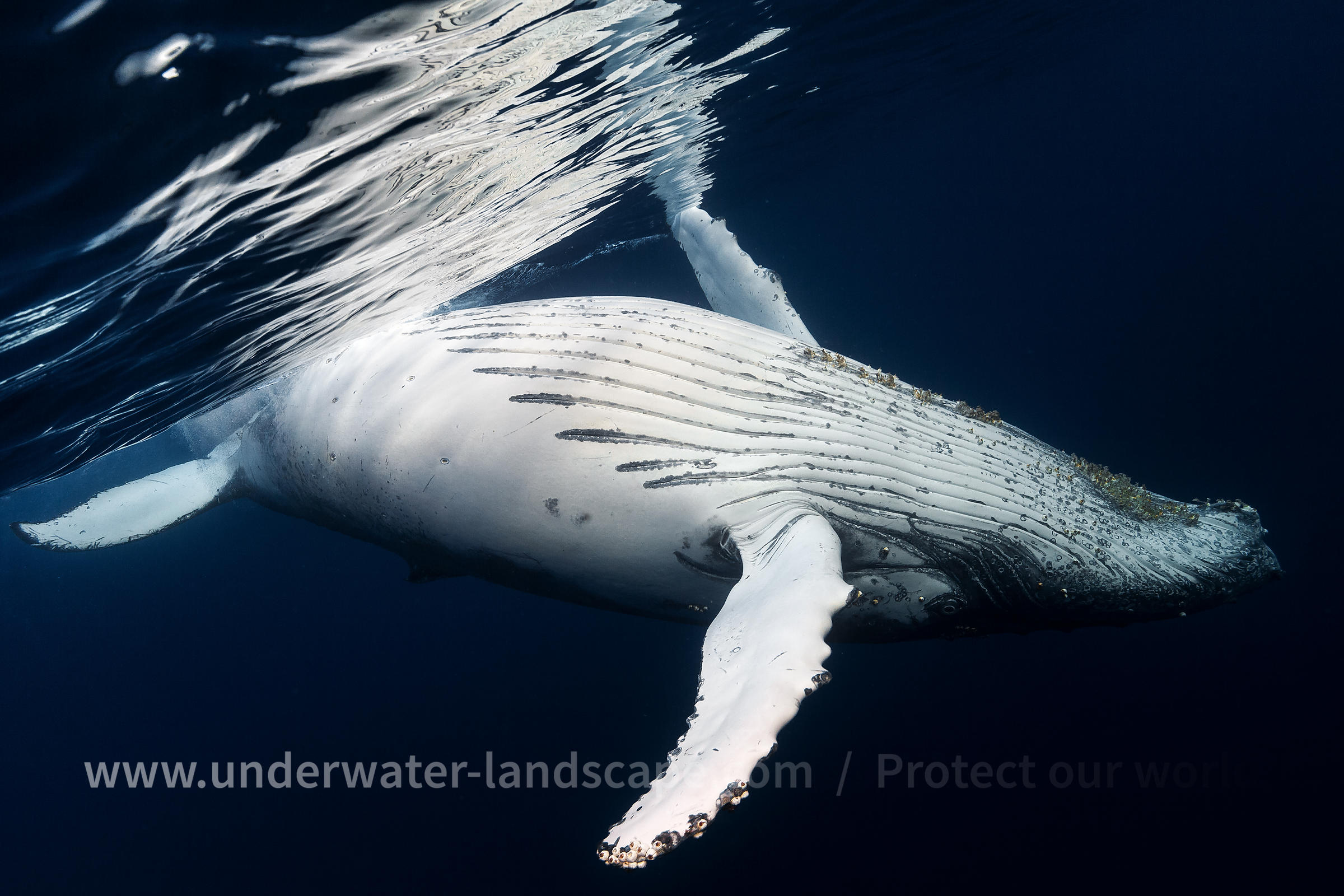 Always stay at a safe distance from them: they are not agressive but, as wild animals, can be unpredictable. The caudal fin of a whale, by moving water, can knock you out without even touching you. Don’t ever touch the animals, you could infect them. If you are in presence of an active group, it is forbidden to go in the water: males are fighting for females, and their fights, with jumps and fin hits on the surface, can be very dangerous.

My encounters with whales

Unique, magical moments that I will forever remember. Interacting with these huge animals can leave no one unaffected. Knowing their height and weight, it’s a wonder how they can move with such poise and grace… The wide, precise and graceful motion of their caudal fin, 5 to 6m wide, or of their pectoral fin, up to 5m long, makes me think of ballet dancing. I have had the chance to see and interact with humpback whales many times: some active groups, immature males, solitary singing males, but also, and these were the most wonderful moments, with mothers and their calves. 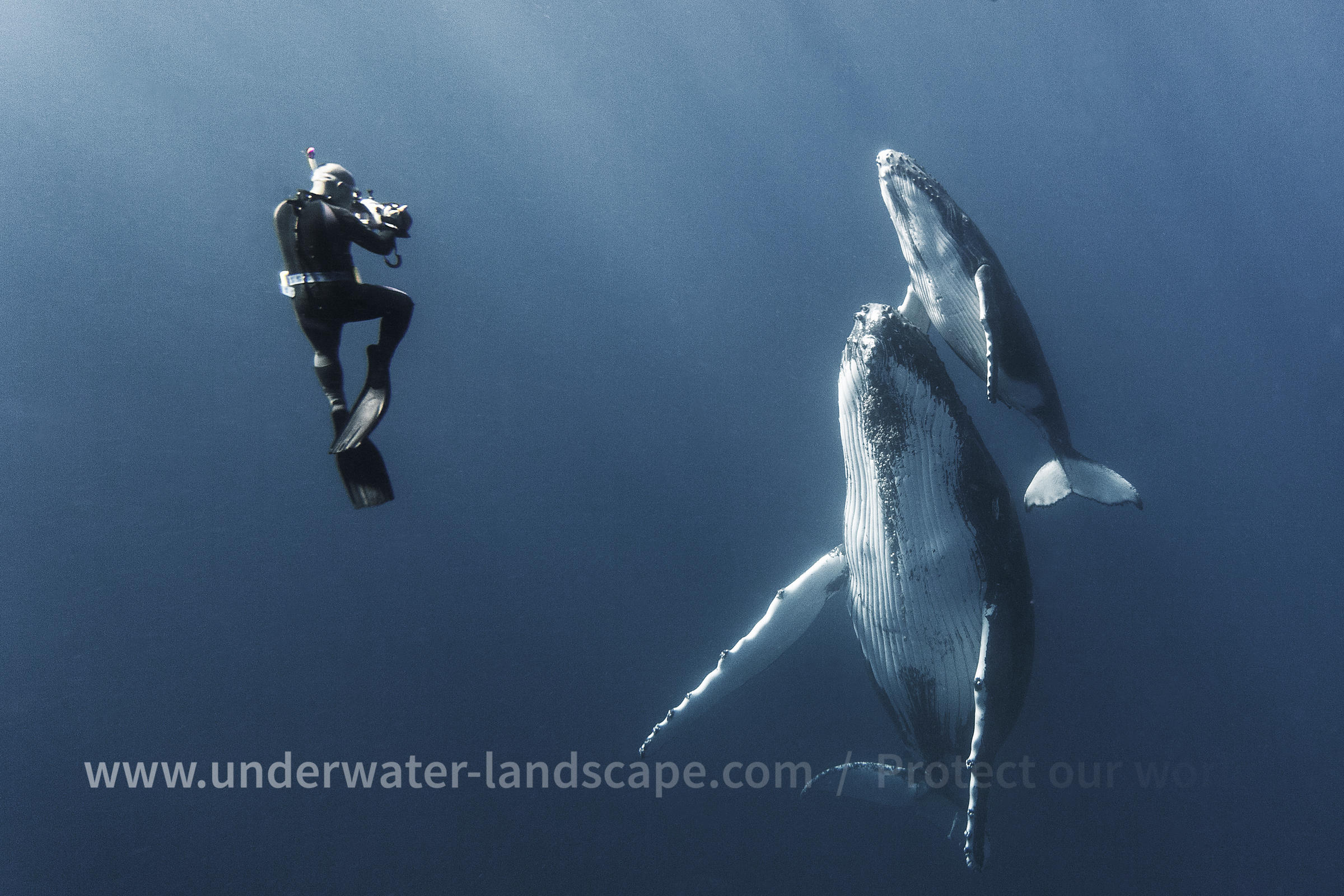 For their first days of life, calves stay glued to their mothers’ side. As calves can not stay underwater without breathing for long, both often come up to the surface. I remember this mother and young calf hiding under its belly, not moving at about 20m deep. I was with a group of friends that day, and we were calmly waiting for them to go back up to breath. I had previously seen the calf moving under its mother’s belly, right before going back up, as if asking permission. I took it as a sign to go down in the water to be able to follow them back up. Unique moments, and unique pictures. After a few weeks, whale calves become more independent. They go up to the surface to breath on their own, while their mothers watch over them from underwater (20m deep). It’s around that time that they become curious and playful, which is a treat for spectators.

I will always remember that time when I went in the water with a very curious calf: I had to swim backwards with my fins for quite a while, being followed by this overweight baby and its huge mother not far behind… It was a special moment with intense emotions. 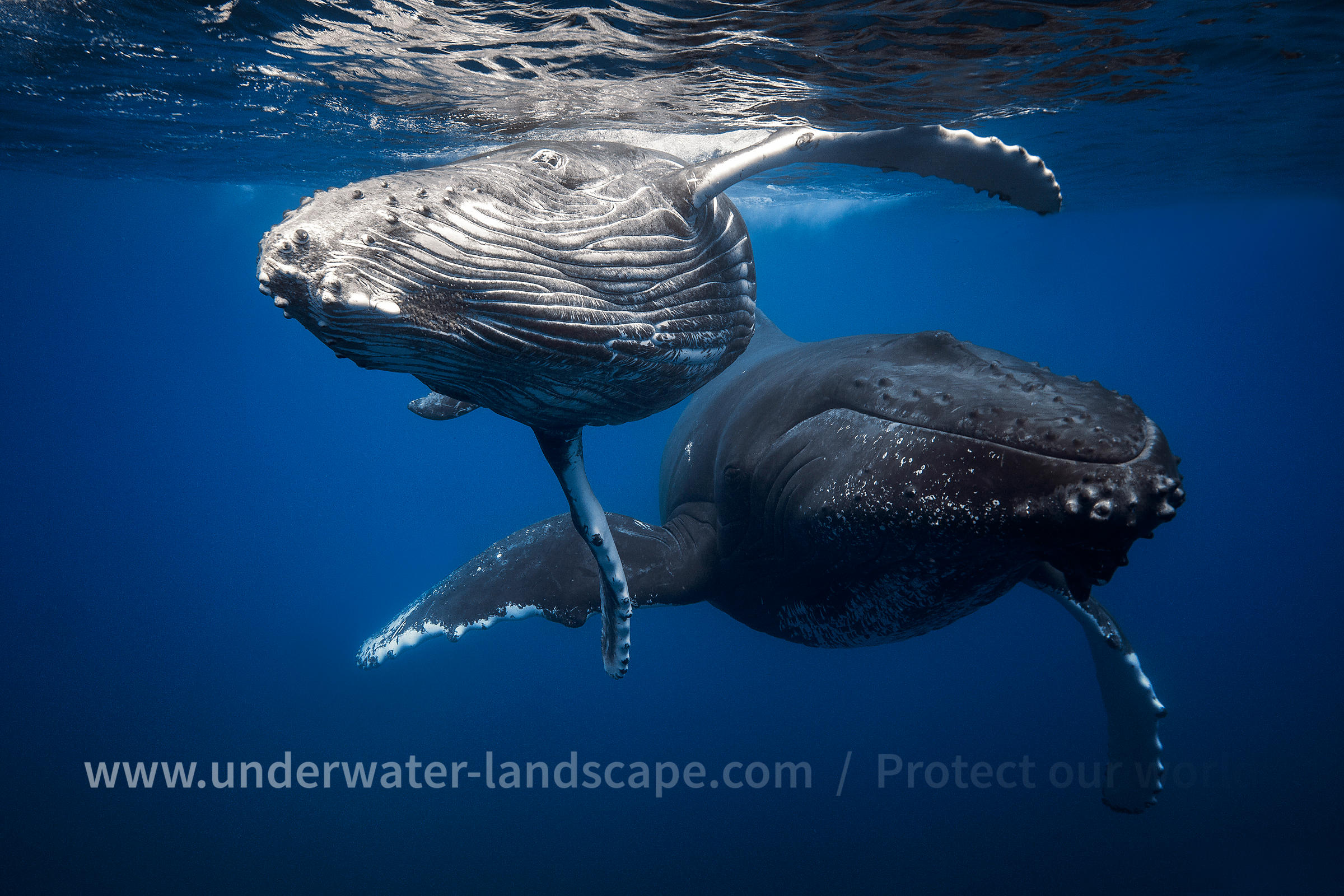 Another day with calf

Another time, during the filming of the “Vacarme en haute mer” documentary (“High seas racket”), we were just a few meters away from the beach. A mother and calf were resting in 10m deep water, maybe 50m away from the shore. We were shooting some underwater sequences when people on the beach saw us. Within moments, dozens of swimmers with no fins or goggles were in the area. It could have been very dangerous, but the whale took the calf under its caudal fin and swam away, carefully avoiding swimmers. The water was so shallow that the pectoral fin was was rubbing on the sandy bottom. Feeling danger, the whale could have become aggressive and hit with its fin to protect its youth, but it didn’t: the mother was careful not to hurt anyone.

This reaction moved me deeply. I have been, since then, more than admirative of these creatures.

I’ll always have a deep respect and admiration for these majestic and emblematic sea animals.

My numerous encounters with these whales are etched in my memory as intense, unique and unequalled moments. 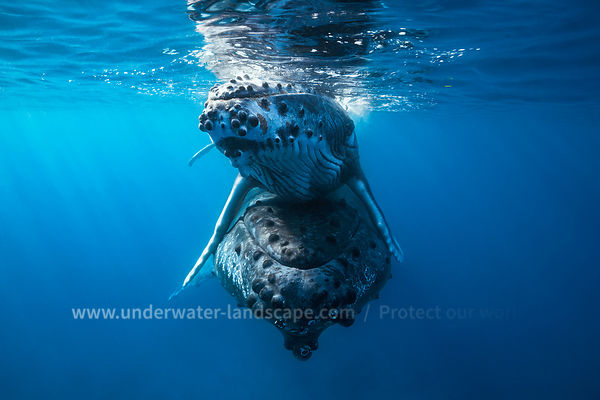